A small, stiffly erect, slender shrub (woody), a short-lived perennial, to 1m tall with OPPOSITE aromatic grey-green leaves, covered on the underside with tiny white hairs. The deep blue flowers drop off as the day progresses. The 2-lipped calyx, the lips subequal, is clothed with spreading gland-tipped hairs. The glands are navy blue. The mature caylces are more than 5mm long, open and gaping in fruit. 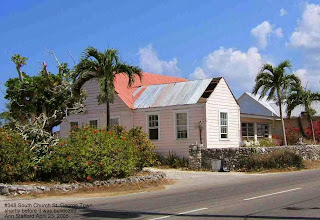 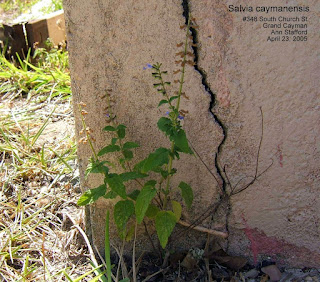 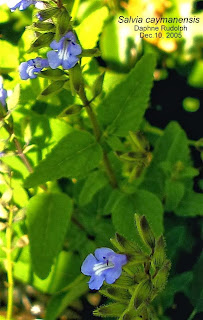 Daphne Rudolph found and photographed Salvia caymanensis in a sandy overgrown area at Cottage, on the south coast of Grand Cayman, Dec. 10, 2005 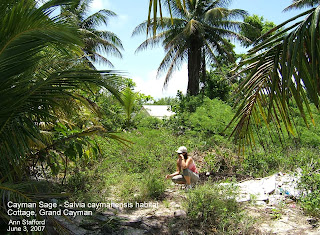 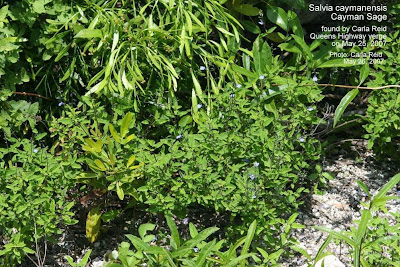 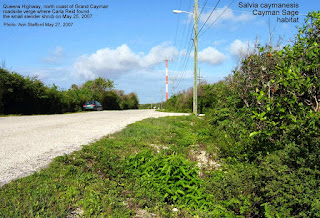 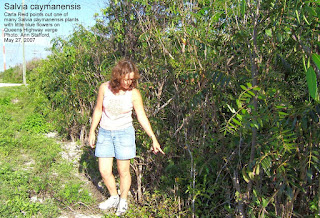 Carla Reid points out Salvia caymanensis, the small, slender shrub with blue flowers,
which she found on May 25, 2007, growing the Queens Highway roadside verge, Grand Cayman.
Maiden Plum - Comocladia dentata, Do Not Touch, Family: ANACARDIACEAE, has a highly irritant sap, to which most people are allergic, is growing on the right.
Photo: Ann Stafford. May 27, 2007 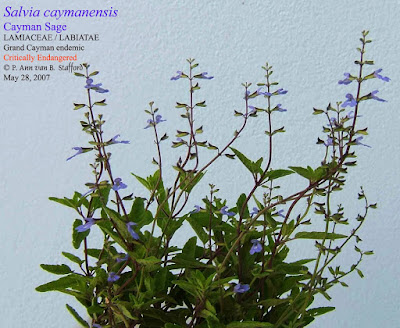 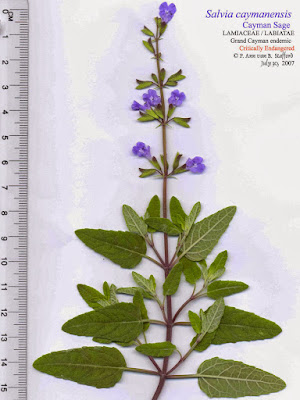 
May 7, 2007
CI$1000 REWARD is offered for finding the little shrub with deep blue flowers.
The last time the plant was officially recorded was 40 years ago by Martin Brunt, June 8, 1967.

Mon. June 11, 2007  Specimens were sent by Fedex to Dr. George R. Proctor in Jamaica by the National Trust for the Cayman Islands.

KEW - Salvia caymanensis (Cayman Sage)
For nearly 40 years it was thought that the Cayman sage was extinct, but after the distribution of 'Wanted' posters in 2007 it was rediscovered.


CaymanianCompass
Plant extinct? Find it and win
by Carol Winker, May 7, 2007
People who study Cayman’s environment are afraid that a delicate little flowering plant may be extinct.
But anyone who proves them wrong will win $1,000 and a place in Cayman natural history.
The plant is the salvia caymanensis, a graceful part of flora that can reach to a height of up to three feet, with tiny blue flowers and a silvery cast to the underside of its leaves.
The reward is offered through the Darwin Initiative, a programme to conserve endangered plants and animals. Partners include the Department of Environment, the National Trust and the Garden Club. 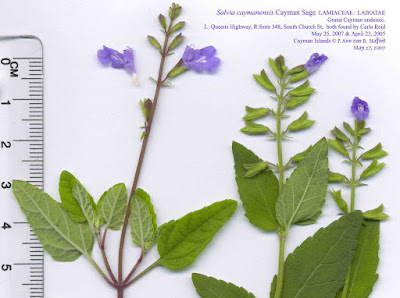 Mrs. Carla Reid was forced to bring her vehicle to a stop one day last month so that trenching machinery could be moved on Queen’s Highway.
As she waited, she looked out of her window and saw something she had feared did not exist any more – a uniquely Caymanian plant identified years ago as salvia caymanensis and known less formally as Cayman sage.
Although Mrs. Reid travels that section of road frequently, it’s a 50 miles per hour stretch, so chances of seeing the plant’s little blue flowers were minimal.
The flowers apparently don’t stay in bloom very long: when photographers went to the area last week, the blossoms were gone. Without them, the plant is not as easy to identify.
Mrs. Reid knew what she was looking for. The Darwin Initiative’s recent offer of a $1,000 reward reminded her of her earlier interest. 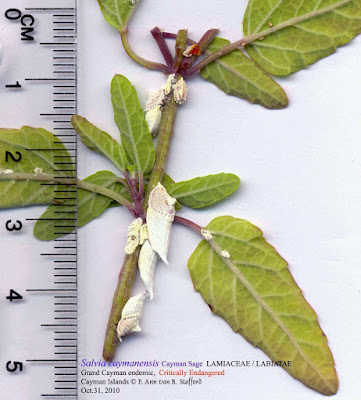 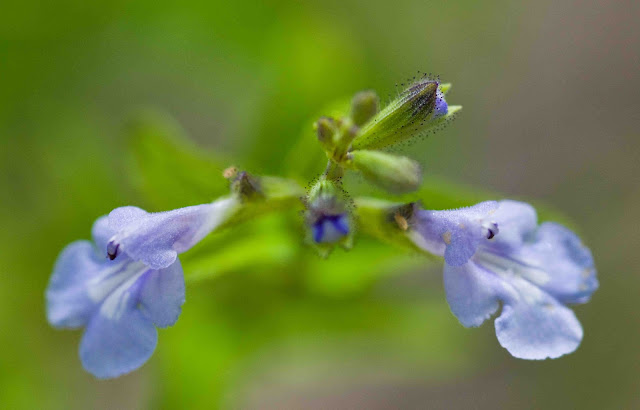 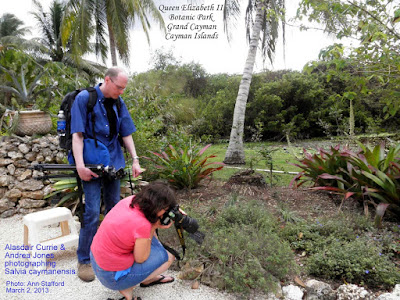 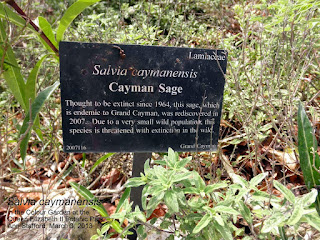