How did Papilio demoleus get to Cayman?


How did Papilio demoleus Linnaeus, 1758 get to Grand Cayman in the NW Caribbean? 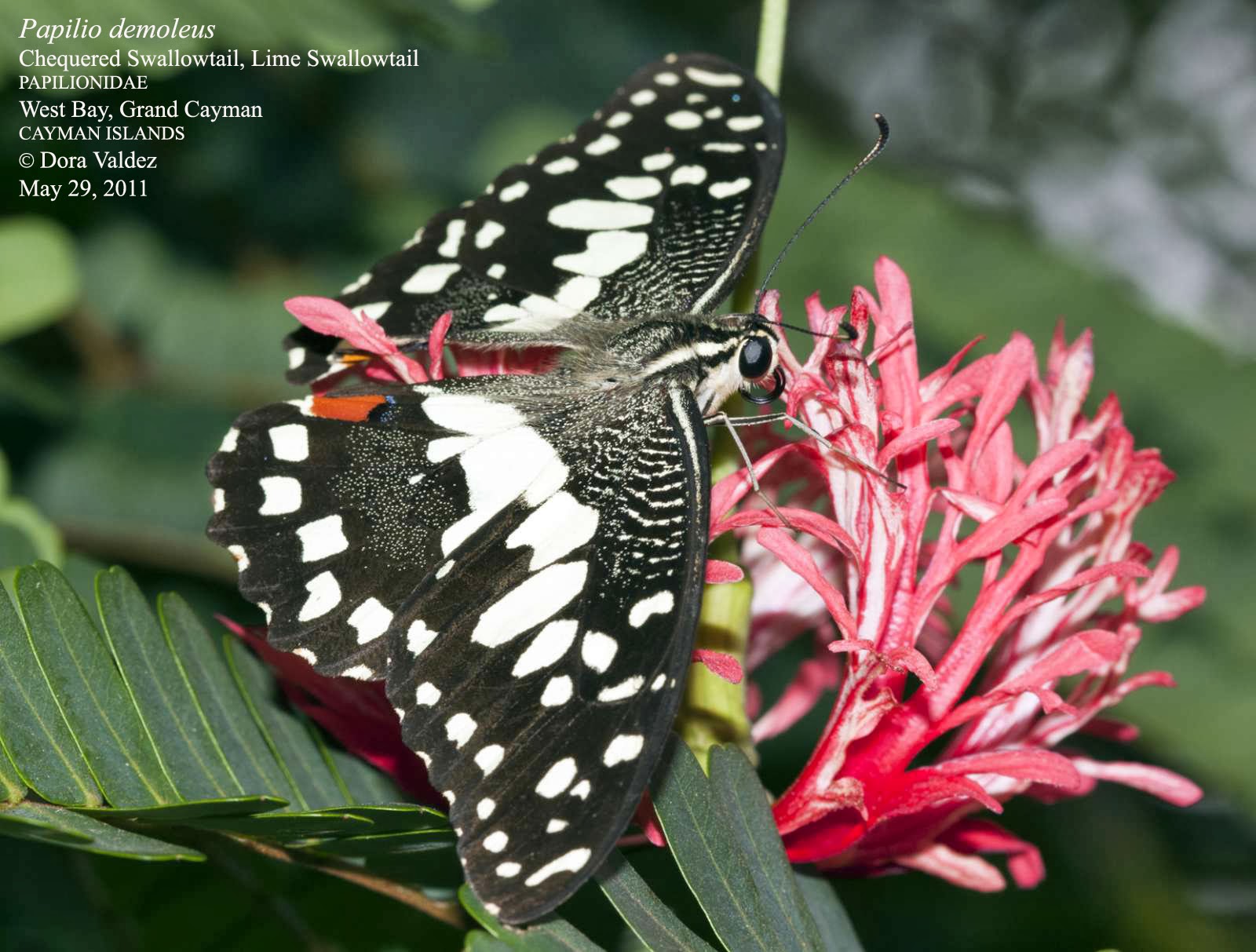 It possibly got here by courier service, from the Philippines for example, to a pupae supply company in the UK and then to a Butterfly Farm in the Eastern Caribbean. From there the adult butterflies might have been dispersed by a hurricane to the easternmost islands of the Greater Antilles and gradually winged their way westwards. 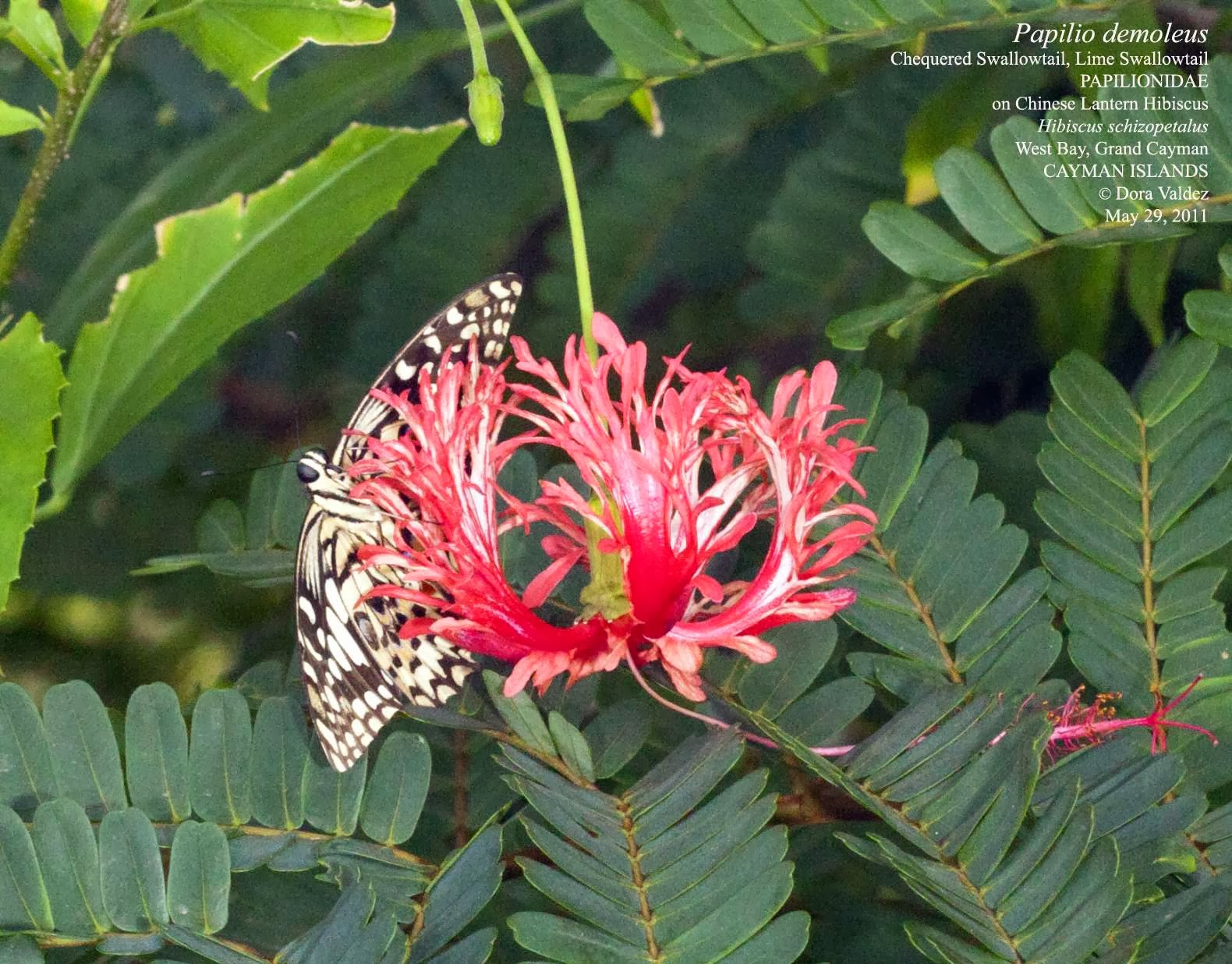 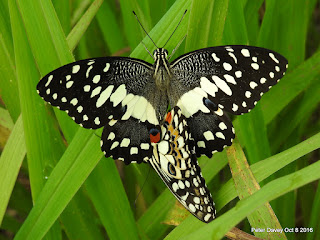 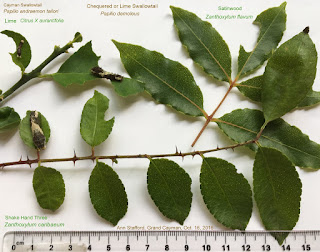 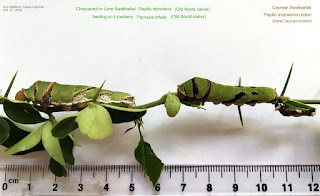 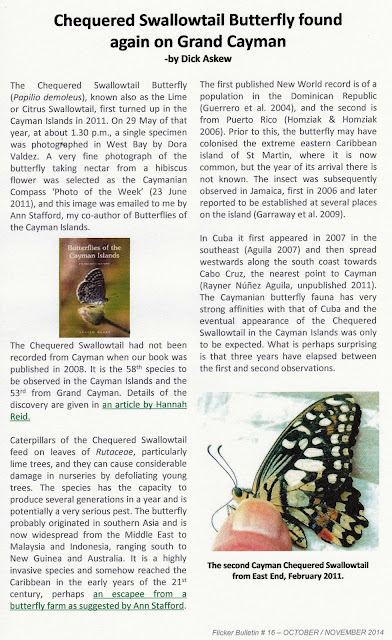 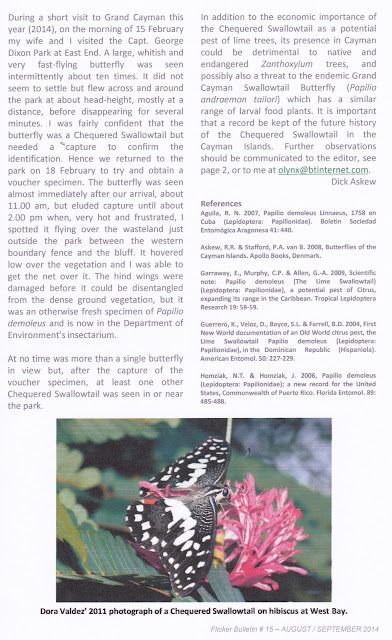 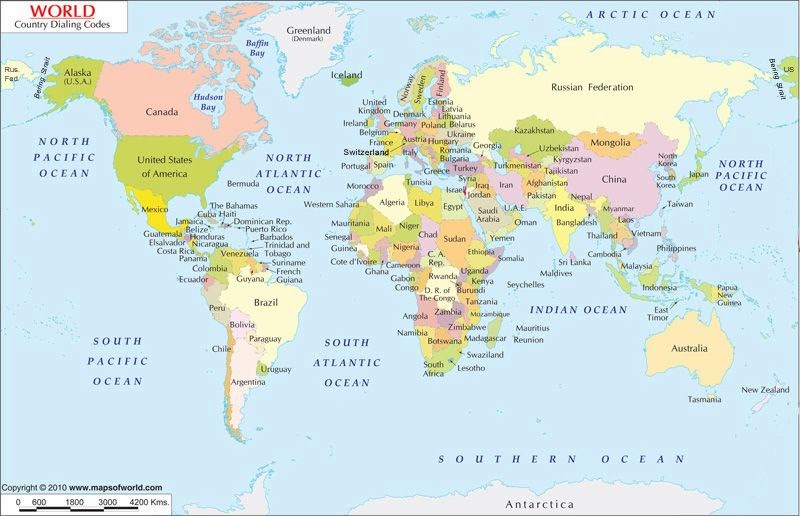 
Introduction:
The lime swallowtail, Papilio demoleus Linnaeus, is sometimes called the chequered or citrus swallowtail. This butterfly ranges widely and is an extremely successful invader. Its proliferation appears to be aided by agricultural land use and urbanization that creates new, suitable open habitat and enhanced availability of host resources.


Distribution:
This species is found throughout tropical and subtropical regions of southern Asia, ranging from Saudi Arabia, Iran and the Middle East to India, Nepal, southern China, Taiwan, and Japan, and south through Malaysia, Indonesia, and New Guinea to Australia. In recent years, P. demoleus has been recorded in the Dominican Republic, Puerto Rico, and Jamaica.


Papilio demoleus is native to the Old World where six subspecies are recognized. 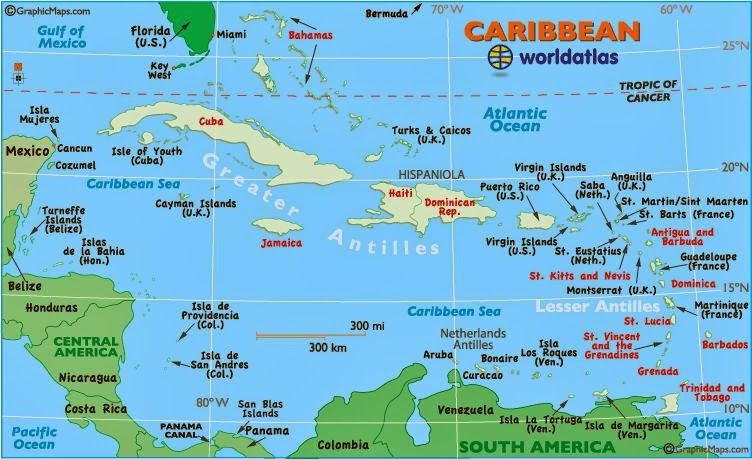 “St. Martin is home to a modest number of butterfly species. According to sources on the island, a number of species are no longer present due to a combination of habitat destruction and mosquito spraying. Many of the remaining species are quite common and can readily be seen by any visitor.”


Checkered Swallowtail (Papilio demoleus) St. Martin
“The checkered swallowtail, also called the common lime butterfly is one of the most common swallowtails in the world. According to one article, the first confirmation of this butterfly in the Western Hemisphere was in spring of 2004 in the Dominican Republic, which would seem to indicate a rather sudden and surprising spread of this species as it is currently seen commonly on the island, feeding at flower bushes.” 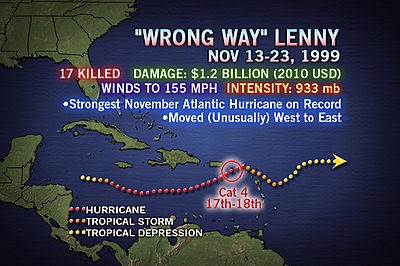 Lenny spent its entire lifespan (November 13-23) traveling in a west-to-east fashion from the central Caribbean to the Atlantic, which was unprecedented in the history of tropical record-keeping.

Hurricane Lenny was the strongest November Atlantic hurricane on record


The 825-nucleotide haplotype (DL1) common to all Dominican Republic specimens also was the most common haplotype recorded in Southeast Asia; thus, genetic and morphological data independently have resulted in the same conclusion - the butterflies collected in the Dominican Republic originated in Southeast Asia. Furthermore, the single haplotype identified from 1,400homologous nucleotides in 24 P. demoleus specimens from the Dominican Republic suggests that these were the progeny of a single introduction (founding bottleneck). That haplotype DL1 was common and widespread in Southeast Asia, however, does not rule out the possibility of multiple  introductions. Because the species was not recorded by Takizawa et al. (2003) and despite regular insect collecting activties and intensive survey conducted annually by field entomology students, it is reasonable to assume that a single introduction took place shortly before they were captured in March 2004. The large number of  specimens collected in late September 2004 (n = 24) from several new locations (Guerrero et al. 2004, Wehling 2004), and recent collections by Ruth Bastardo from 200km distant in the far wes of the country at Pedernales (June 2005) and La Descubierta (August 2005) as well as north of the Cordillera Central near Santiago (August 2005) indicates that P. demoleus is established locally and expanding its range, even surviving severe storms in the Dominican Republic in May 2004 and hurricane Ivan in early September 2004.


How did the butterflies get to the Dominican Republic? There are several possible modes of introduction. First, is the unlikely possibility that the species reached there of its own accord. Records of P.demoleus migrating in Asia (Williams 1938) and in Australia (Common and Waterhouse 1981, Braby 2000) do exist; however, if the source population was located at the western (Baghdad) or eastern (southern Japan) extremes of the range, it would need to traverse distances exceeding 11,000 or 14,000 km, respectively, across continents, oceans, or both, and there are no recent records of the species at intervening localities. It is possible that a batch of early stages was accidentally introduced from Southeast Asia on air-freighted citrus products or equipment associated with the industry; however, Wayne Wehling (USDA) thinks that the butterflies may have been introduced deliberately for hobby interests or for release at a celebration such as a wedding (Wehling 2004). Whatever the mode of entry, these swallowtail butterflies are regarded as citrus pests in their home range, so their introduction to and establishment in the Dominican Republic could impact financially on the local citrus industry. Authorities are currently monitoring the butterflies, and it is hoped that the outbreak can be controlled in the Dominican Republic, and prevented from expanding into other citrus-producing countries in the Caribbean as well as mainland North and South America."

This pdf include a book review by Andrei Sourakov, McGuire Center for Lepidoptera and Biodiversity, Florida Museum of Natural History, of  Butterflies of the Cayman Islands, 2008  R. R. Askew & P. A. van B. Stafford. 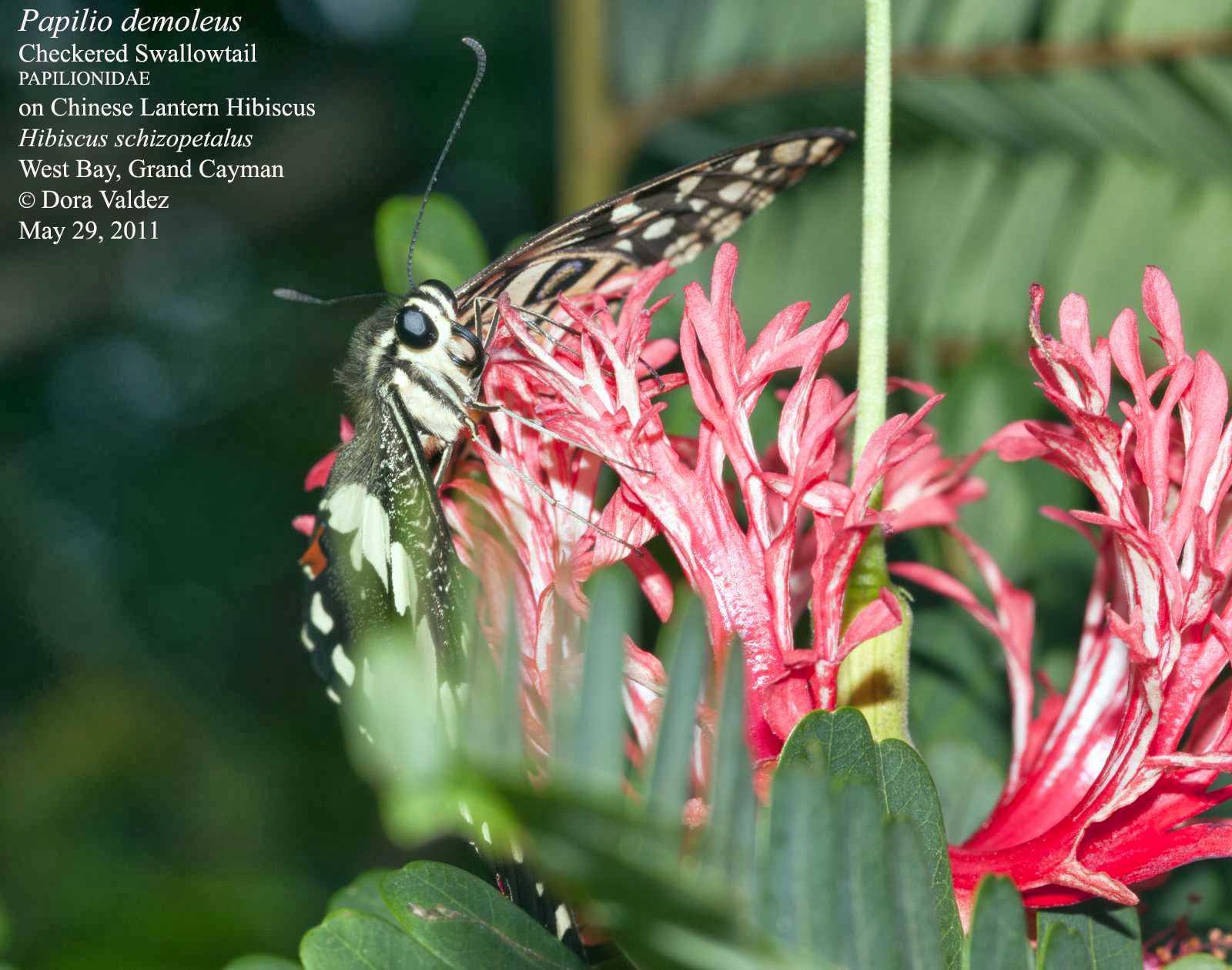 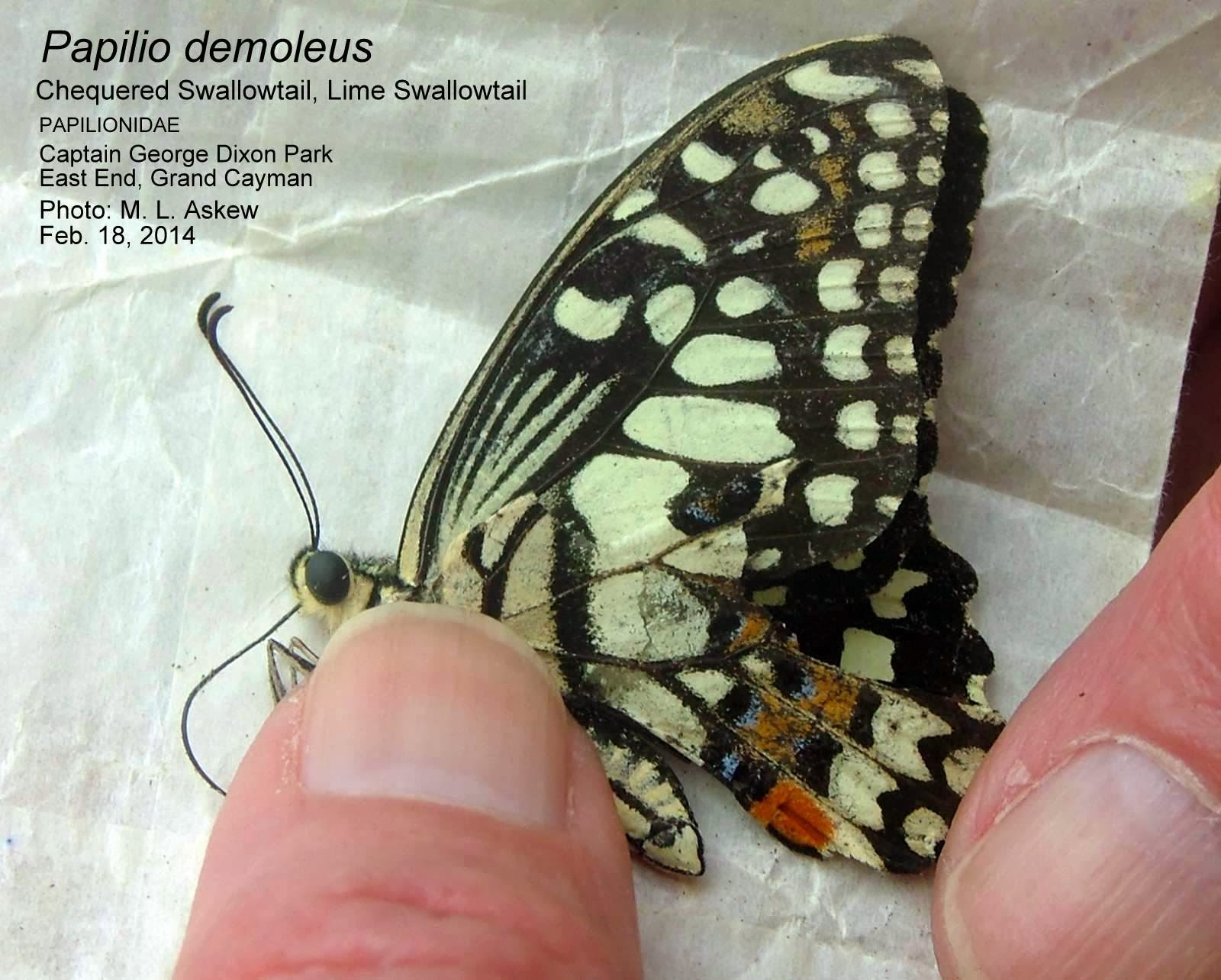 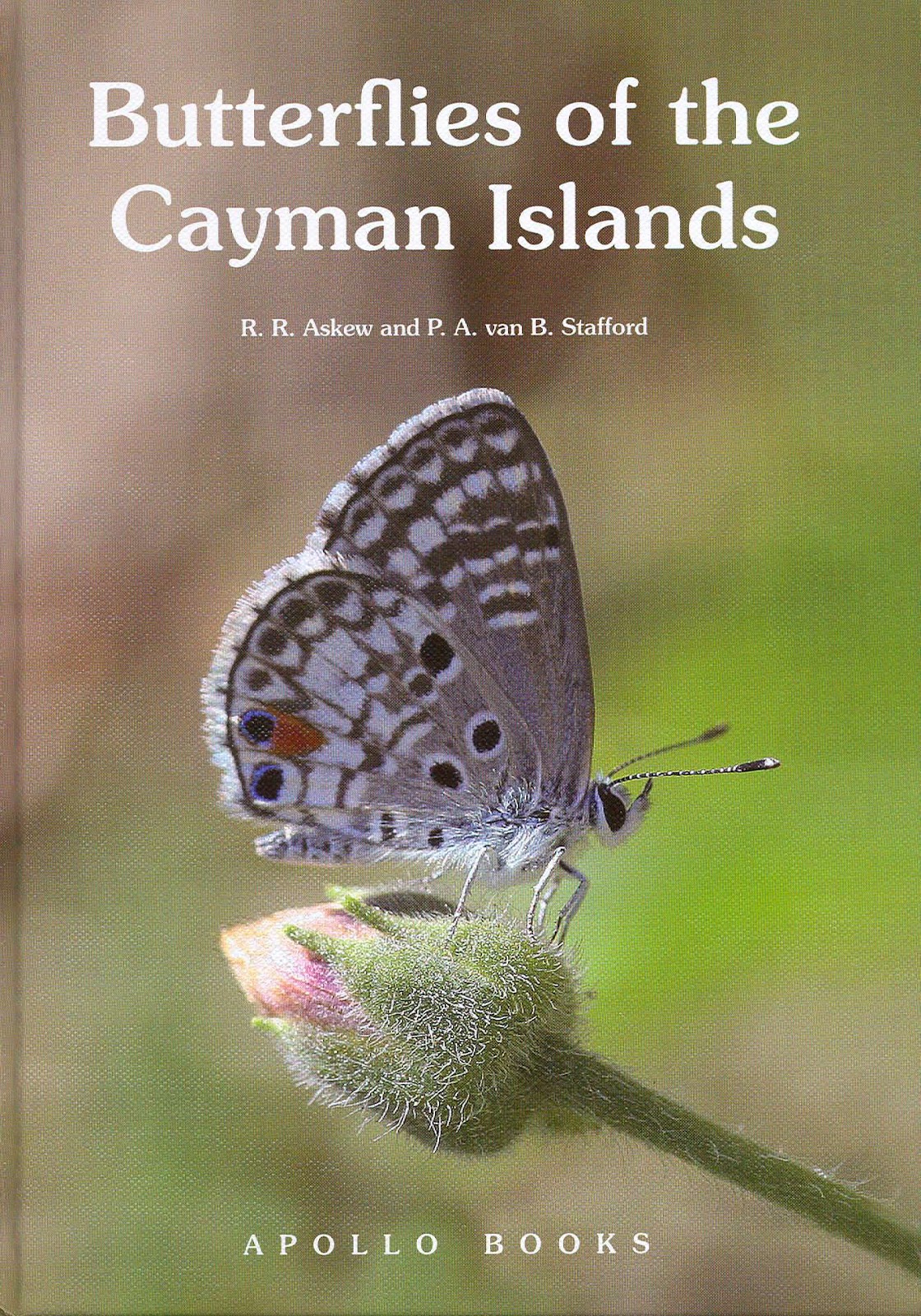 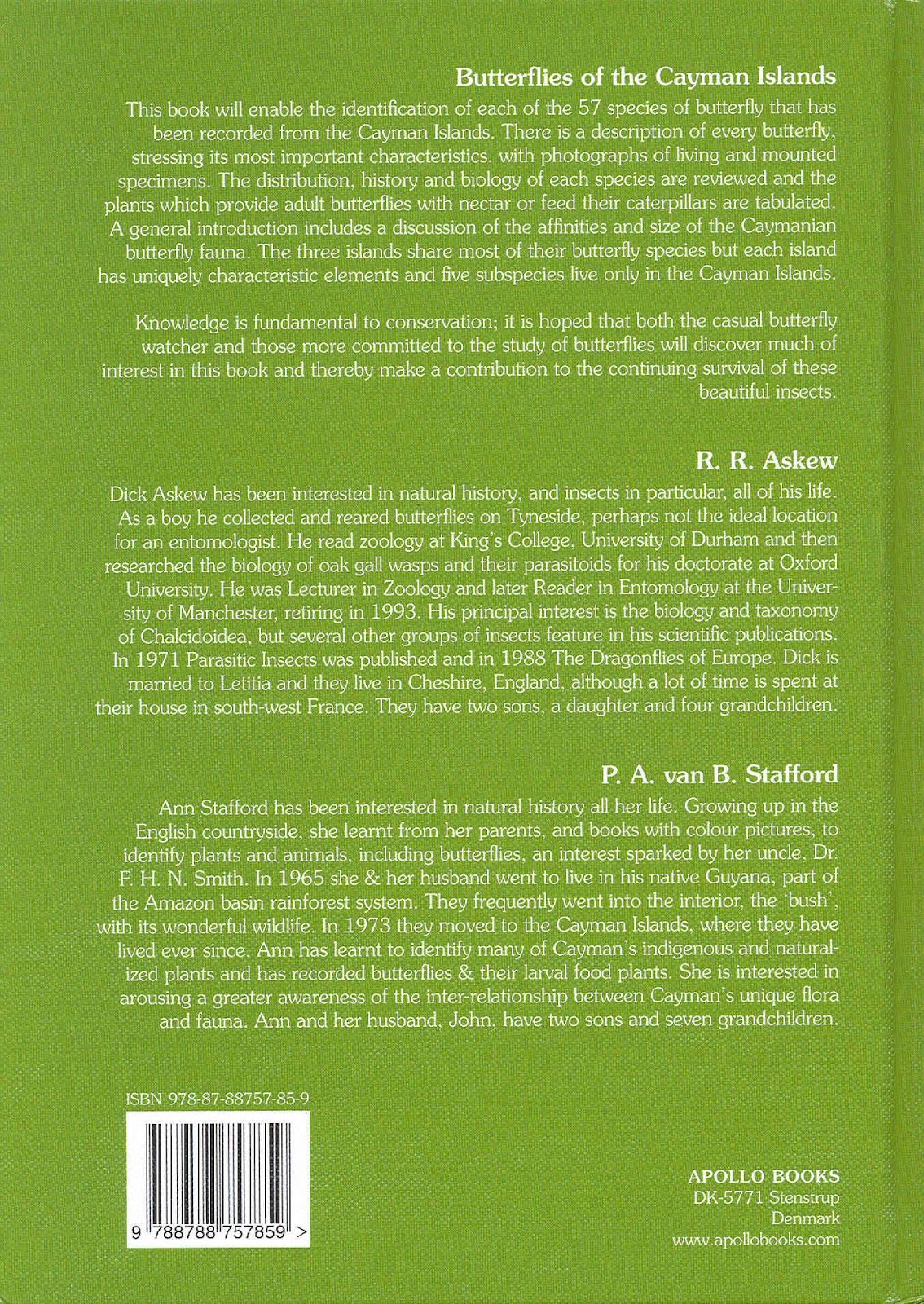 This book will enable the identification of each of the 57 species of butterfly that has been recorded from the Cayman Islands. There is a description of every butterfly, stressing its most important characteristics, with photographs of living and mounted specimens. The distribution, history and biology of each species are reviewed and the plants which provide adult butterflies with nectar or feed their caterpillars are tabulated. A general introduction includes a discussion of the affinities and size of the Caymanian butterfly fauna. The three islands share most of their butterfly species but each island has uniquely characteristic elements and five subspecies live only in the Cayman Islands. Knowledge is fundamental to conservation; it is hoped that both the casual butterfly watcher and those more committed to the study of butterflies will discover much of interest in this book and thereby make a contribution to the continuing survival of these beautiful insects. 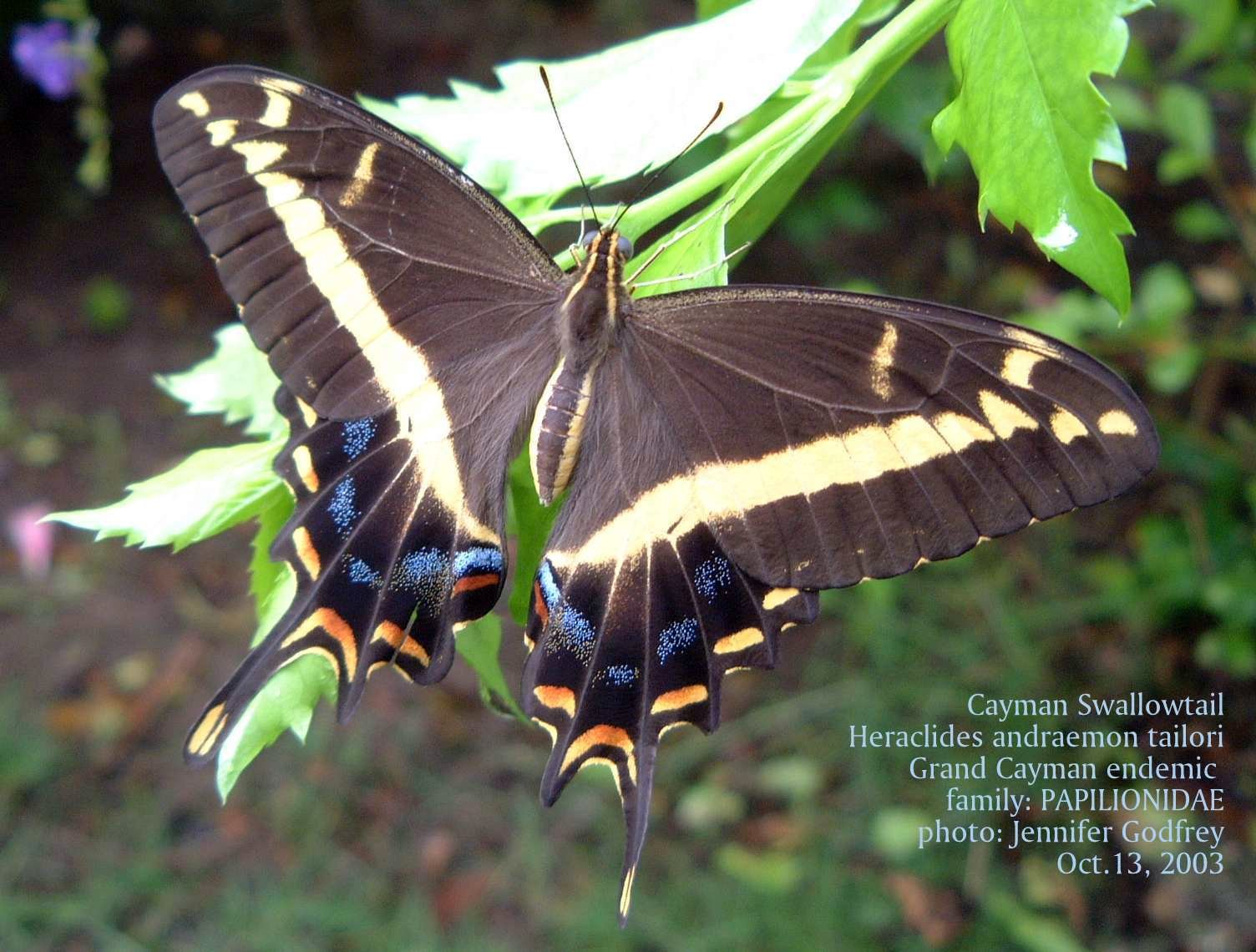 
Flora of the Cayman Islands by George R. Proctor, Kew 2012 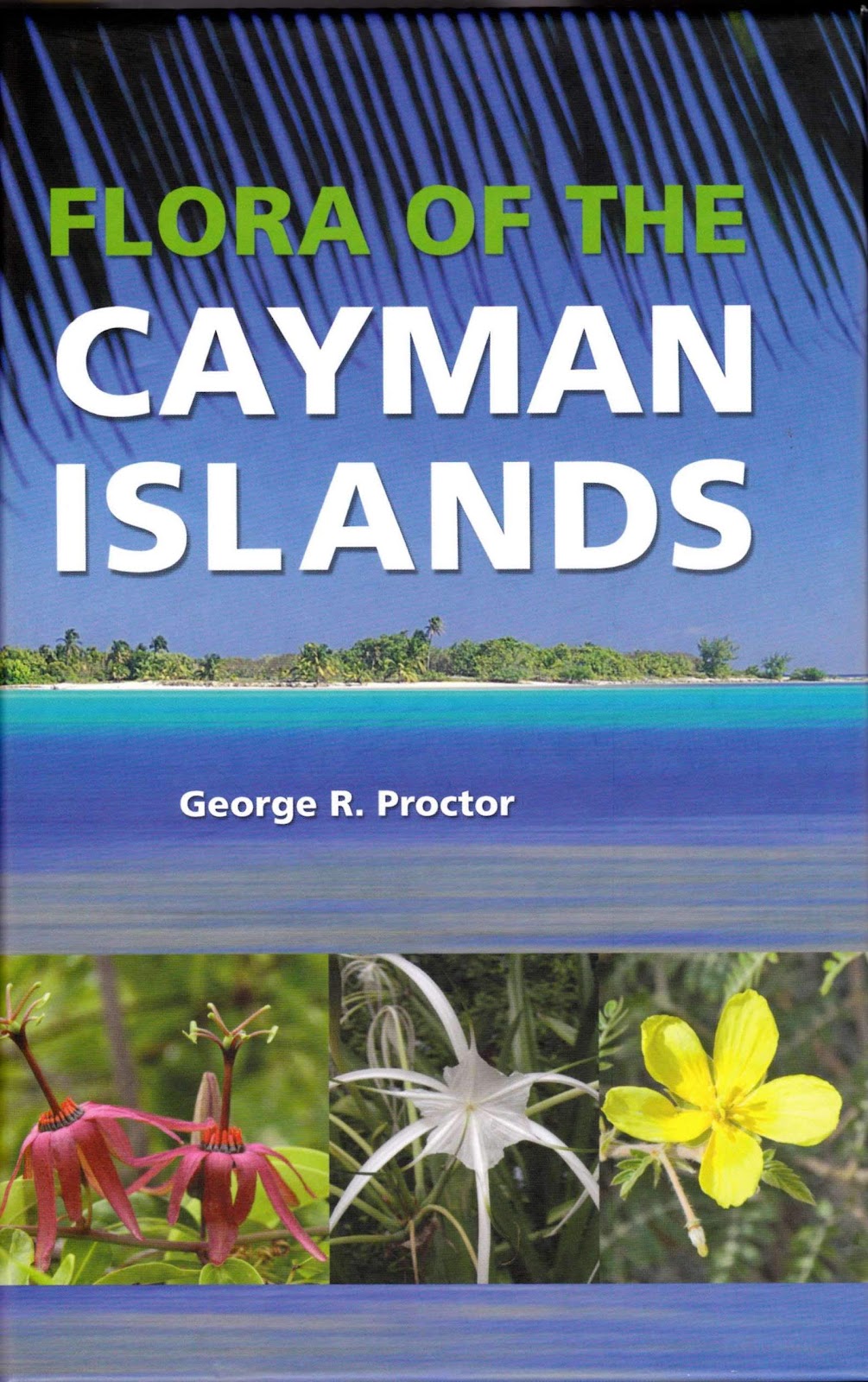 
Sept. 5. 1995 Hurricane Luis struck the island with devastating force. A 700-mile wide, Category 4 hurricane with 160-mph winds relentlessly battered the island for two days and two nights as the eye wall stalled overhead. The island was ravaged, there was total destruction and devastation that Luis‘s fury had reeked on the Butterfly Farm. Everything was gone except two barrel pots that marked where the entrance had once been.


Sept. 1998 Hurricane George hit, packing 125-mph winds, was worse than Bertha, but not as bad as Luis. The Farm was rebuilt again.


Nov. 18, 1999 Hurricane Lenny,  the “wrong way” hurricane, stayed for two days and nights. The Farm was yet again all but destroyed. Lenny was not only a powerful Category 4 hurricane at that time, but also became the strongest November hurricane on record. 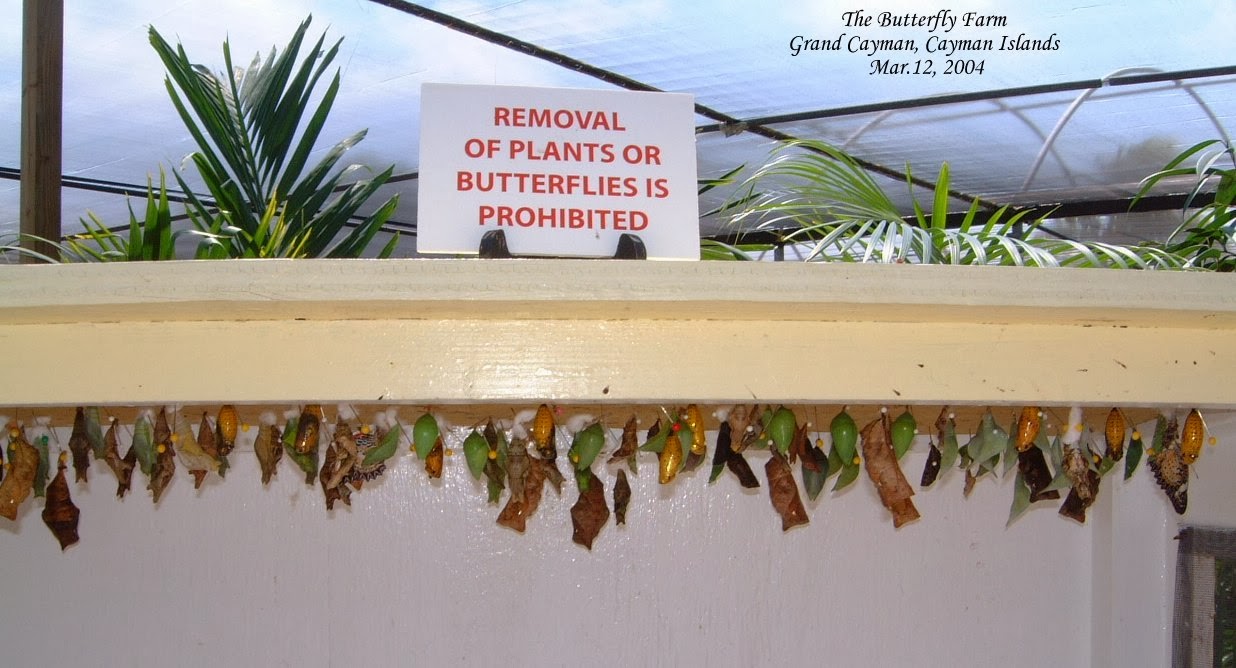 Imported pupae, sent by courier from the UK, from pupae suppliers around the world 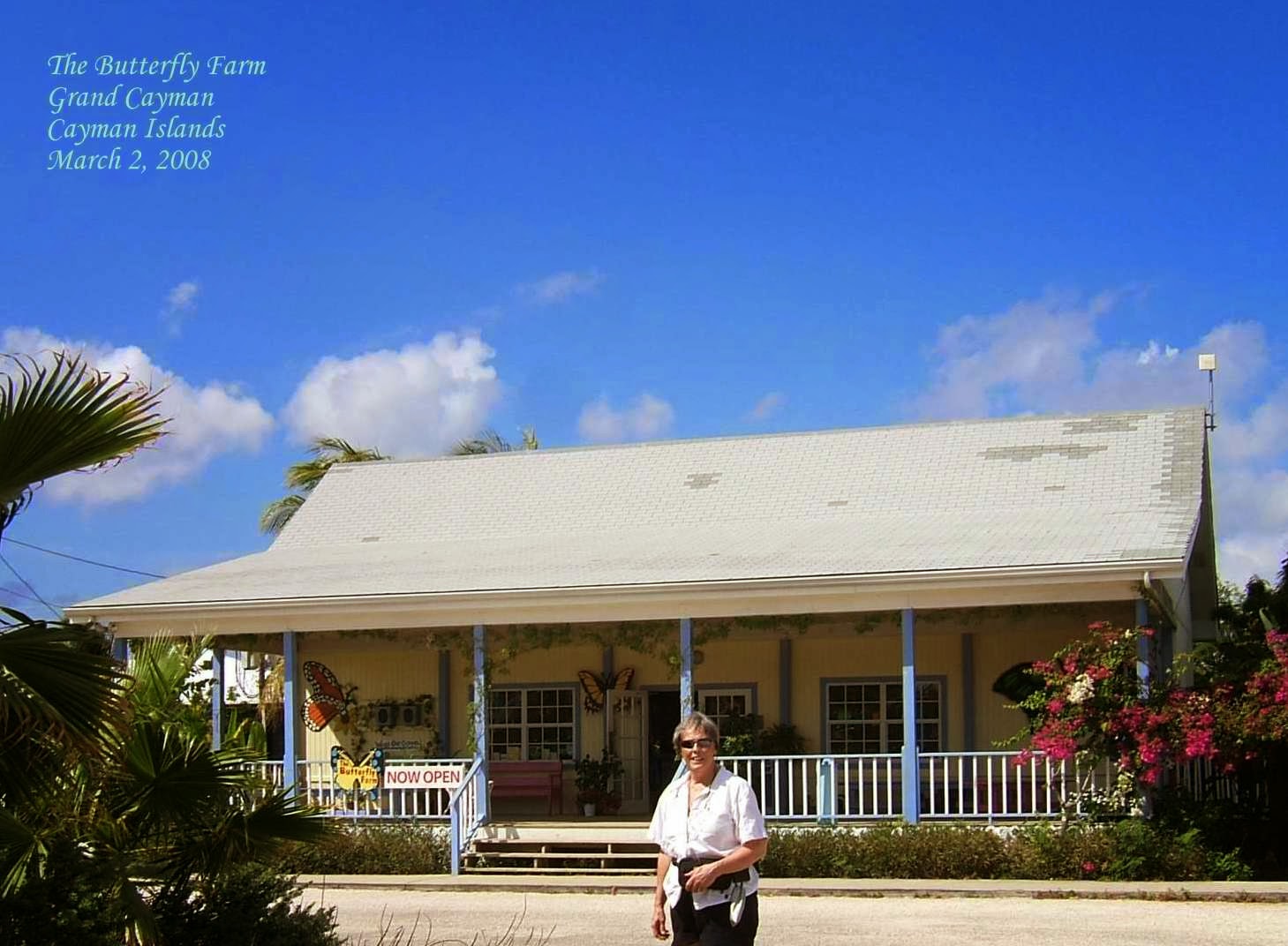 The Butterfly Farm Gift Shop, Grand Cayman, March 2, 2008.
The live butterflies were in the meshed area on the other side.


2004 Sept. The butterflies inside the meshed area at the Butterfly Farm were euthanized before Category 5 Hurricane Ivan hit. 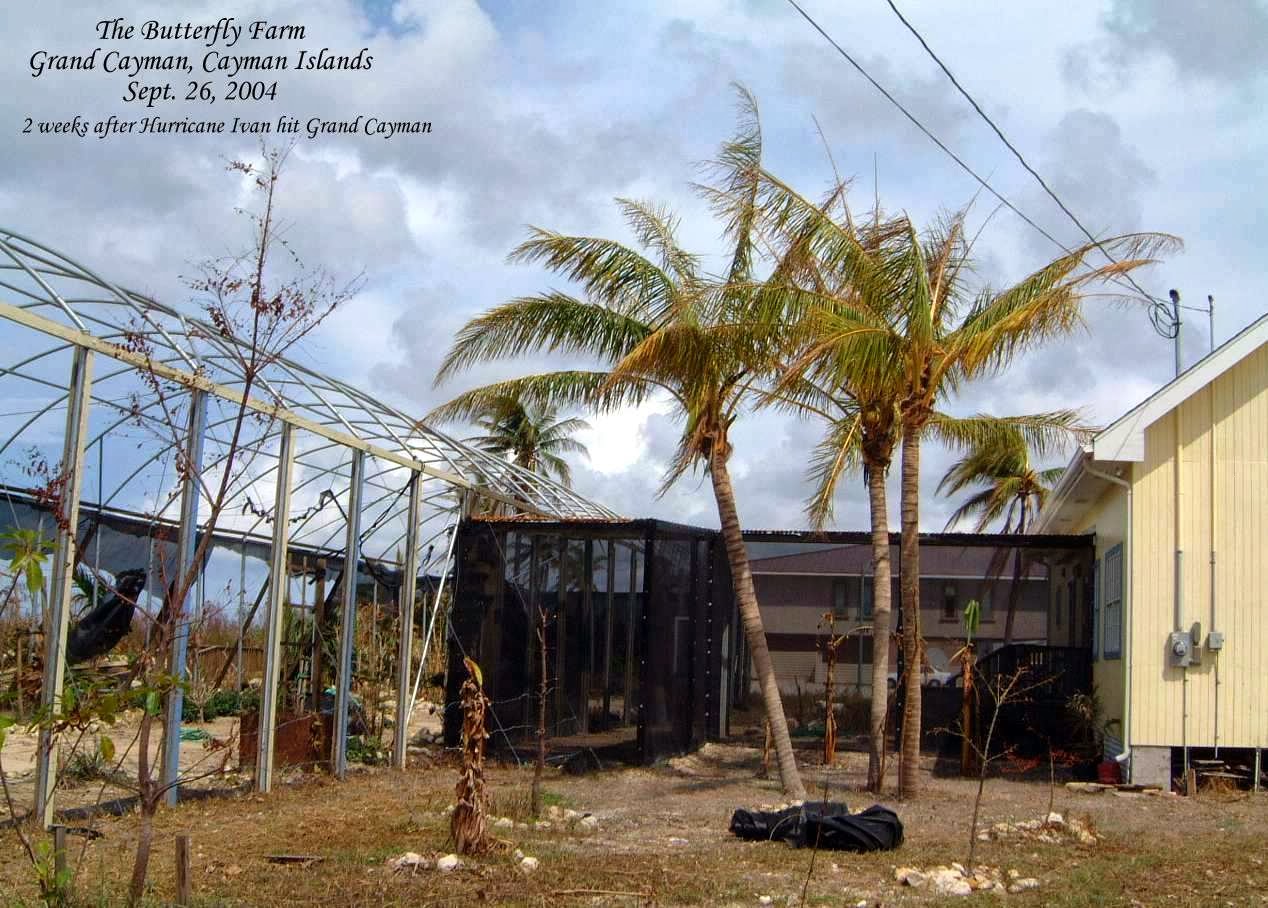 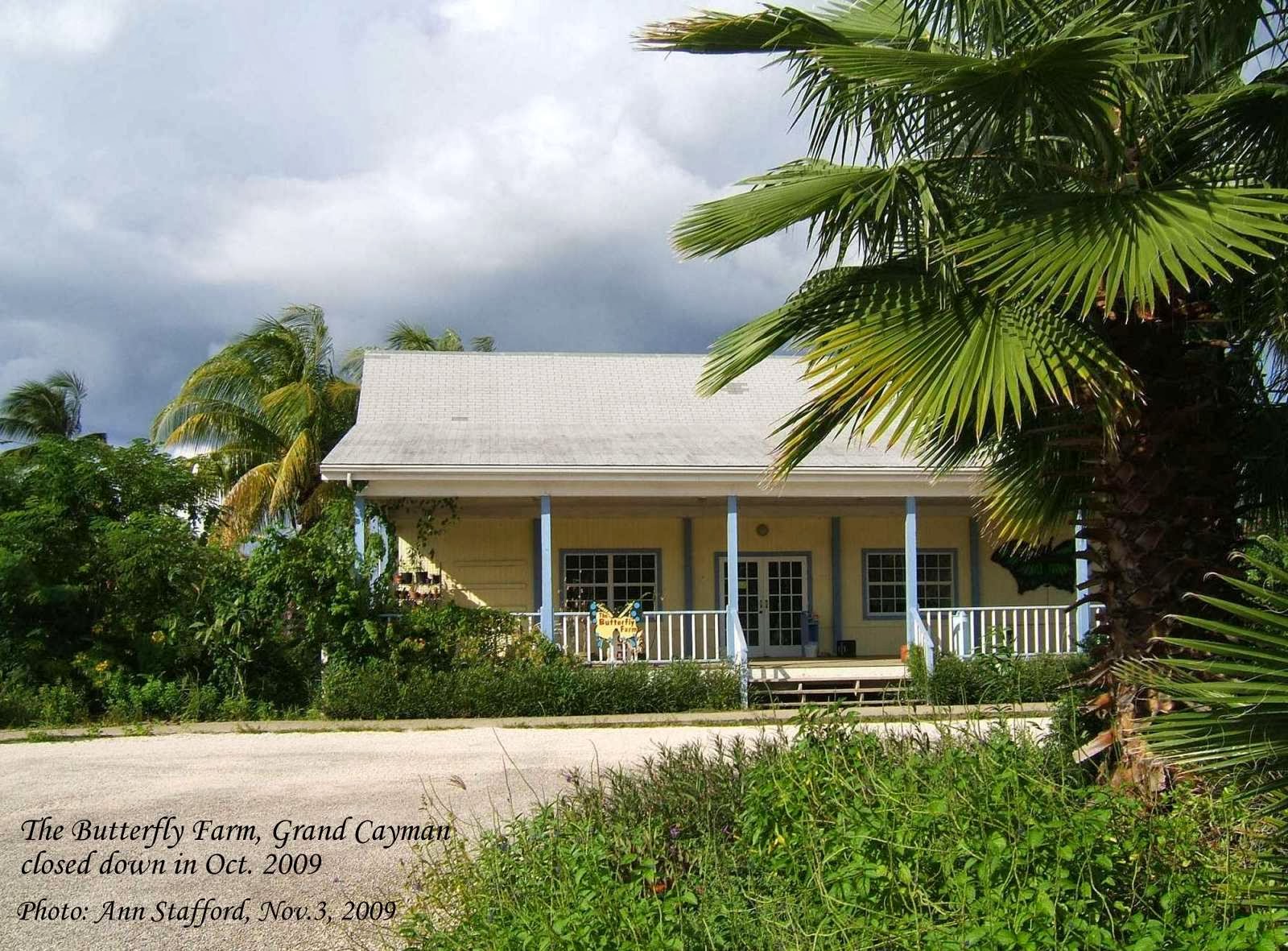 Butterflies Unique to the Cayman Islands

Cayman Islands Department of the Environment

CaymANNature Butterflies, Moths and their Plants