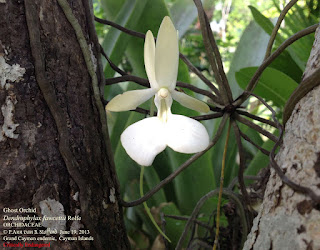 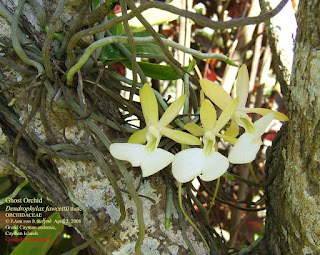 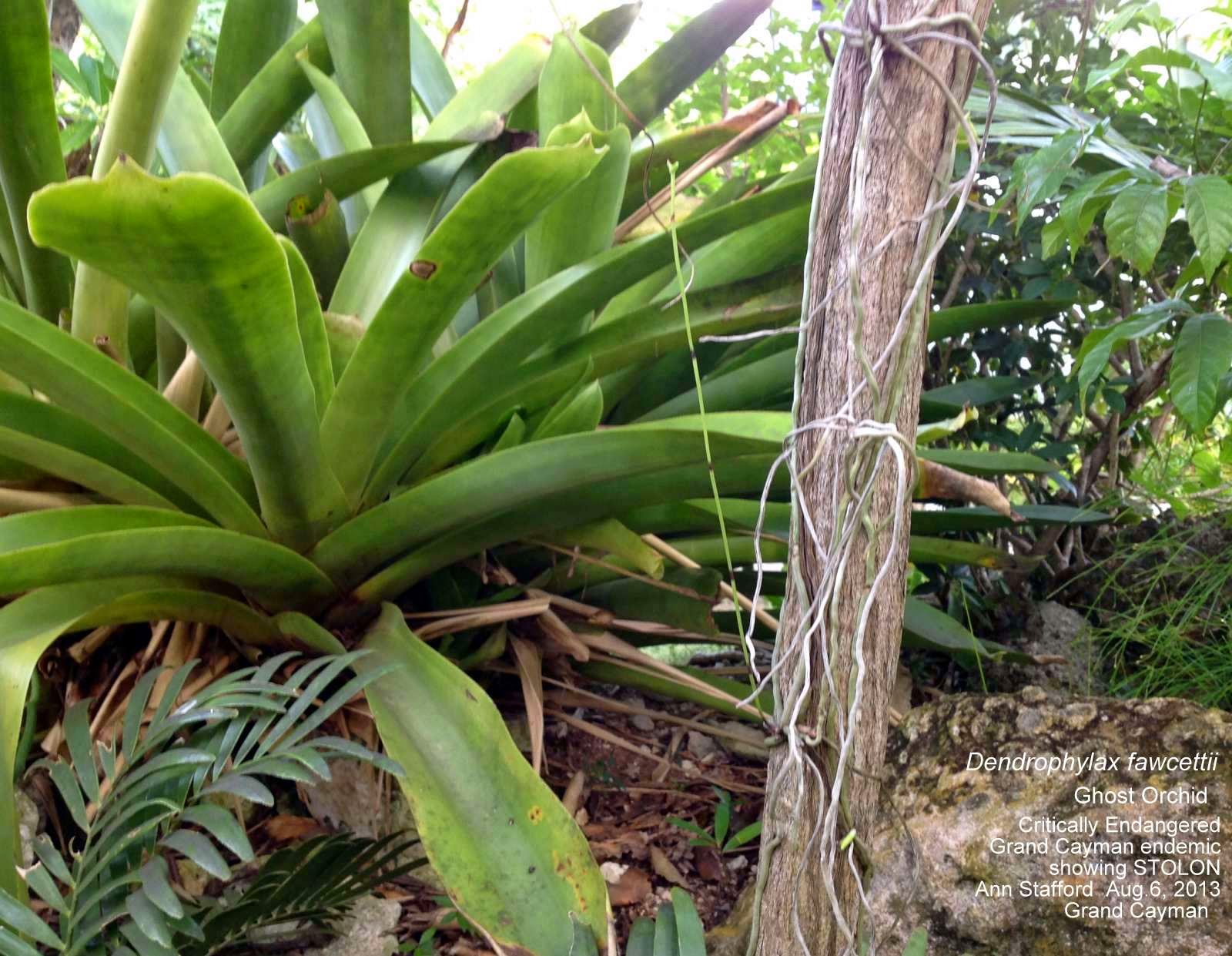 Ghost Orchid - Dendrophylax fawcettii,
showing stolon - elongated stem,
on the end of which tiny new roots are growing and from which a new plant is formed.
Photo: P. Ann van B. Stafford, Aug.6, 2013. 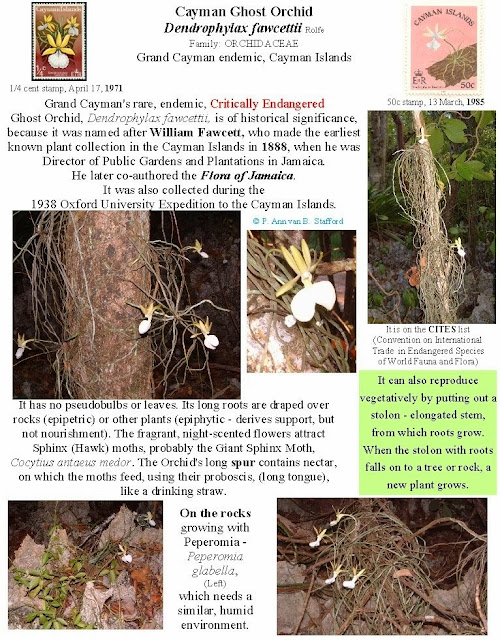 Cayman's Ghost Orchid, which has no leaves or pseudobulbs,
grows on bare rocky limestone karst pinnacles (epipetric) or
on other plants (epiphytic).
The fragrant, night-scented flowers attract Sphinx (Hawk) Moths.
The orchid's long spur contains nectar on which the moths feed, using their proboscis (long tongue) like a drinking straw.
The Giant Sphinx Moth -  Cocytius antaeus is the most probable pollinator of Cayman's Ghost Orchid.


Known only from Grand Cayman Island, the ethereal ghost orchid (Dendrophylax fawcettii) grows on the trunks of trees and bare rocky limestone karst pinnacles. A leafless, spider-like network of roots for most of the year, delicate pale cream flowers bloom between April and June, decorating the moist forest adjoining the wetlands. Sadly, this beautiful orchid faces an uncertain future. The Ironwood Forest, the last remaining fragment of old-growth forest in George Town, is bounded on all sides by the urban development of the nation’s capital. The forest extends to just 46 acres of this, while the ghost orchids are confined to an area of only six acres.


Development of the west side of Grand Cayman has been voracious in recent years. In 2008, government plans to construct a bypass through the forest, and through the portion occupied by the orchids, provoked outcry from both the public and the owners of the privately-held Ironwood Forest land. The forest won a stay of execution thanks to the campaign by the protestors and the bypass plans were shelved. However, this temporary reprieve will be insufficient to ensure the long term survival of the enchanting ghost orchid as the Ironwood Forest continues to remain without any formal protection. The successful protection of the forest would also preserve (among numerous other native species) four additional Cayman Islands endemics of cultural as well as natural significance (Ironwood: Chionanthus caymanensis, Thatch palm: Coccothrinax proctorii, the Banana orchid: Myrmecophila thomsoniana (Cayman’s National Flower), and Hohenbergia caymanensis). The latter, a giant bromeliad nick-named “Old George”, is known naturally only from this area.

What needs to be done?


The Cayman Islands currently lack the comprehensive conservation legislation necessary to establish national protected areas, and only five per cent is under the protection of the National Trust for the Cayman Islands. With appropriate legislation, protection of the Ironwood Forest would be possible, either by purchase or through establishing management agreements with the private landowners. This would benefit the landowners by enabling them to maintain their land in its natural state, as they have done for generations. All that is required to enable this is the political will.


1938 Oxford University Biological Expedition to the Cayman Islands
Posted by CaymANNature at 14:14