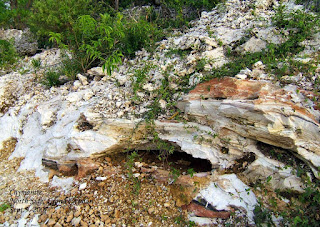 Geologists believe that the multi-layered semi-precious gem stone Caymanite, believed to be found only in the Cayman Islands, was formed between sixteen and twenty-five million years ago, during the Oligocene-Miocene epoch.

The various colours result from different metals: black and grays from manganese, the red hues from iron, blue and green from copper, and so on.


Caymanite is an extremely hard material and must be worked with special tools including diamond-tipped cutting wheels and grinders. Extensive polishing after the piece is carved results in a brilliant, marble-like finish. The art of working and shaping Caymanite is very specialized, and only after many years of practice is one able to produce items that are suitable for resale.