Matlike Heliotrope
Family: BORAGINACEAE
Cayman Islands, Cuba and Hispaniola
It was found by Wilfred Kings on the 1938 Oxford University Expedition to the Cayman Islands, on Grand Cayman and Little Cayman, and by George R. Proctor on Cayman Brac (1992). 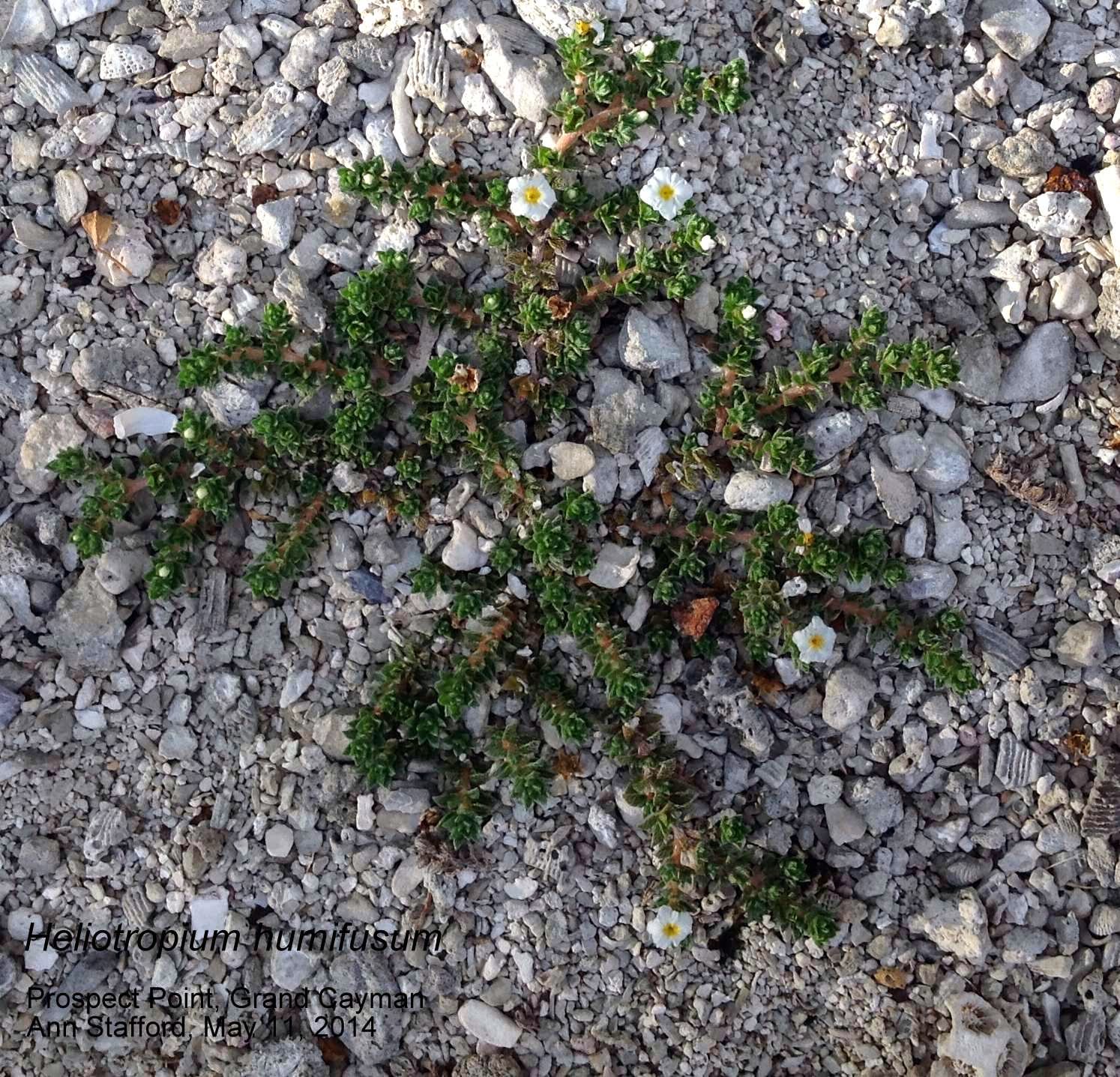 Matlike Heliotrope at Watler Cemetery, May 11, 2014


LEAVES: densely overlapping, rigid, lance-oblong, acute at the apex and 1-nerved, attached to the stem by a broad base.
FLOWERS: Calyx strigose, 2–3 mm long; corolla white with yellow eye, the tube scarcely exceeding the calyx, the expanded limb 2–3 mm across or more. Stigma capitate on a short style.
FRUIT: subglobose, enclosed by the calyx, the nutlets hispidulous.


Proctor’s FLORA Glossary p.694:
Strigose – bearing appressed, sharp, straight, stiff hairs.
Suffrutescent – a stem which is woody and perennial at the base, but has a upper herbaceous portion that dies back at the end of a growing season. The term is also used to mean ‘slightly shrubby’.

Cuba and Hispaniola, usually in gravel-filled pockets of dry, exposed limestone, or in sandy clearings. Cuban plants of this affinity growing on serpentine appear to represent a different species, though usually identified as being the same. 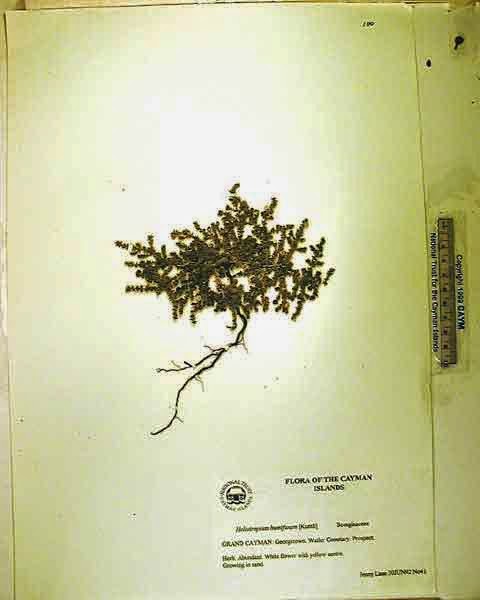 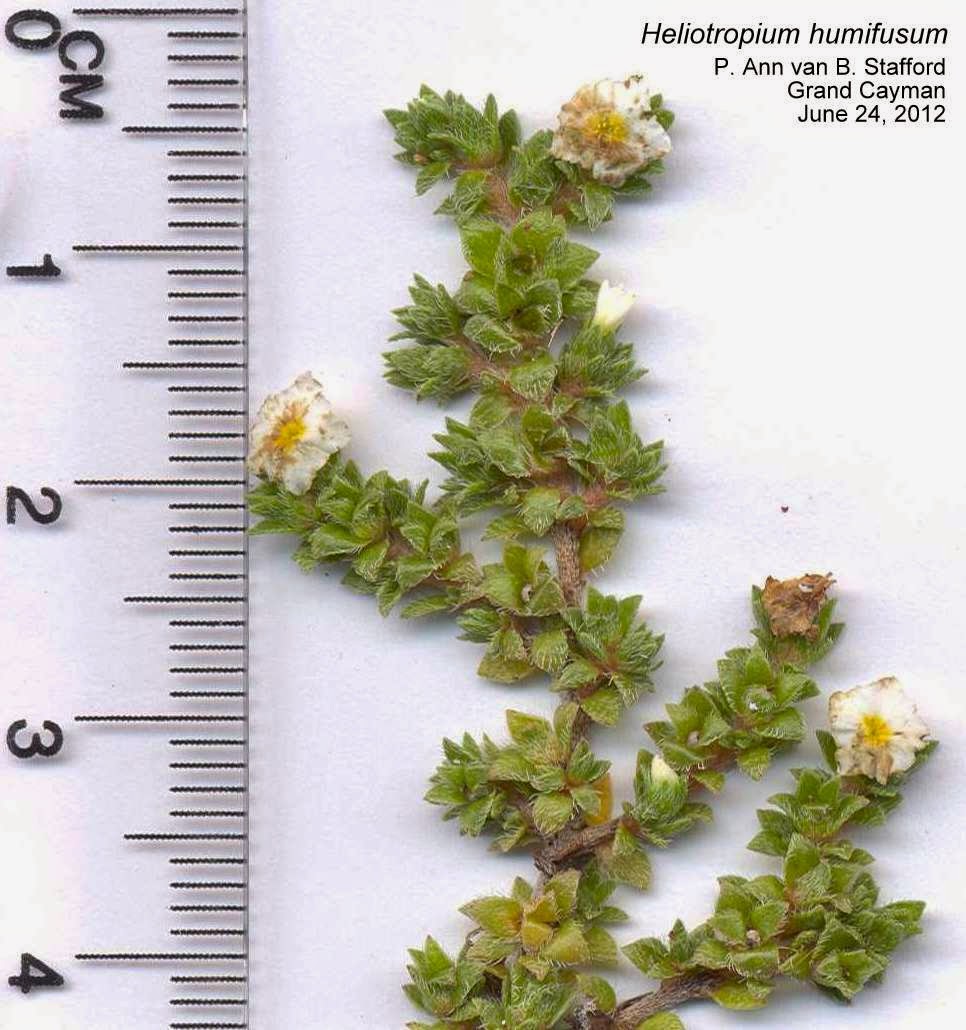 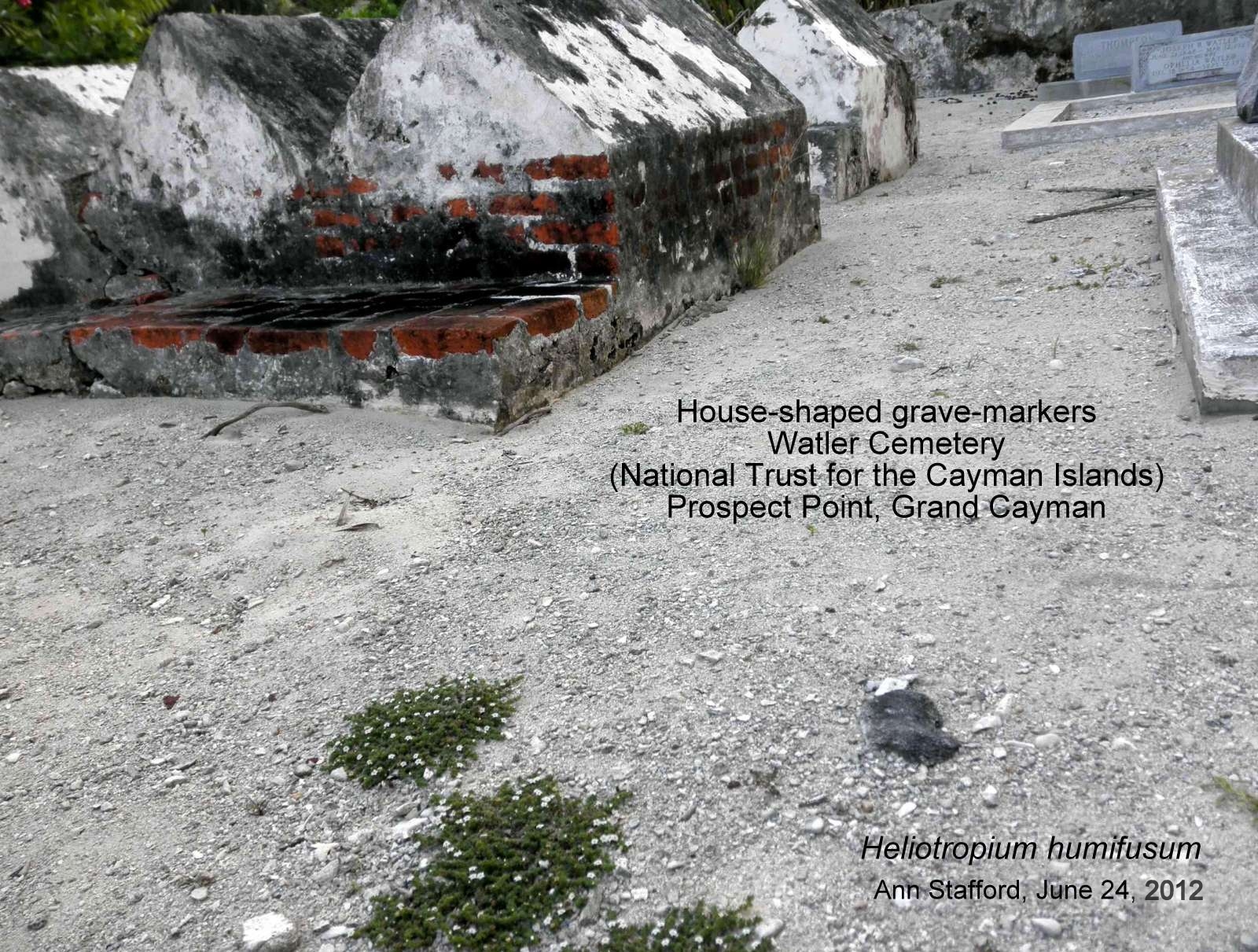 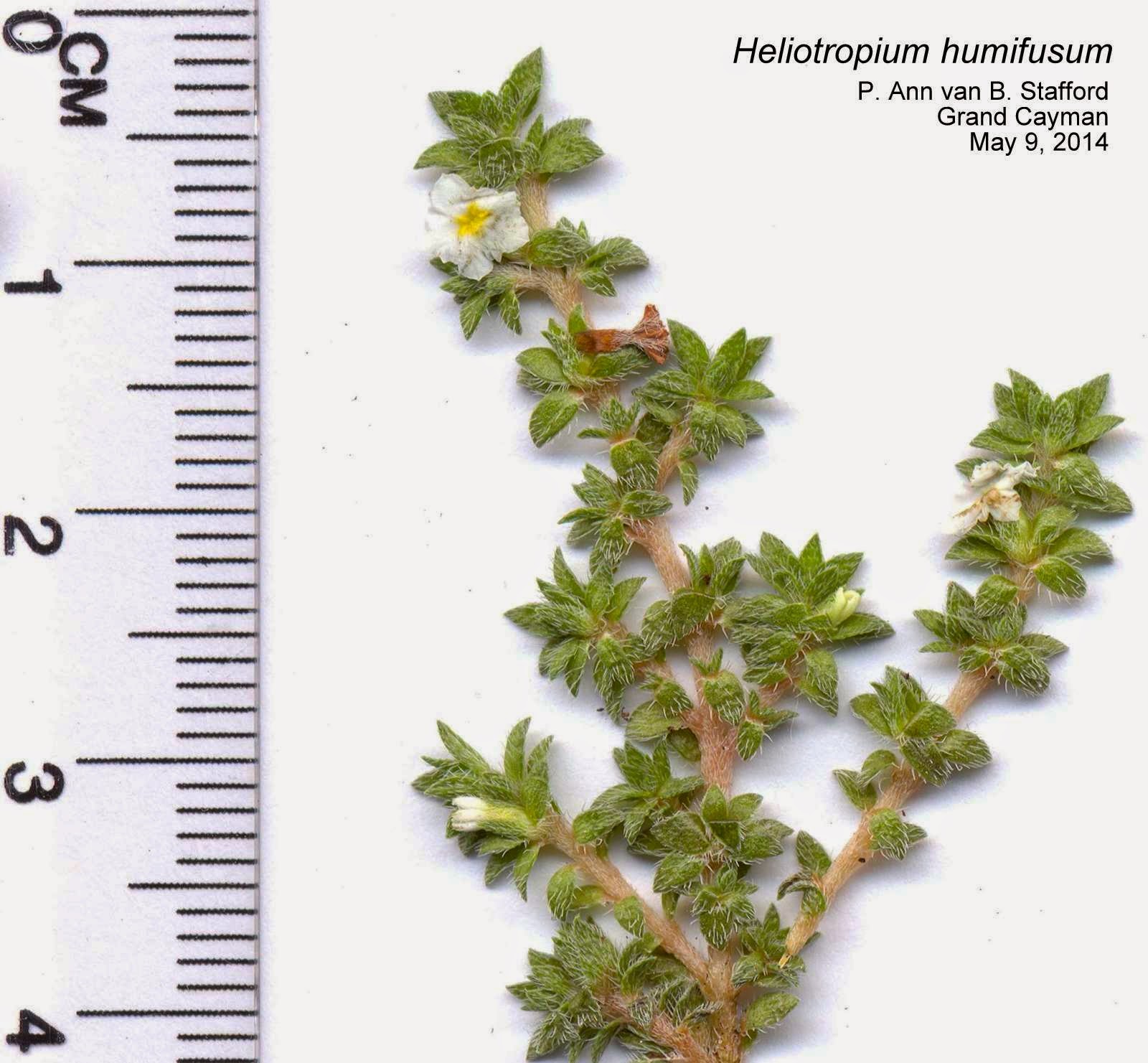 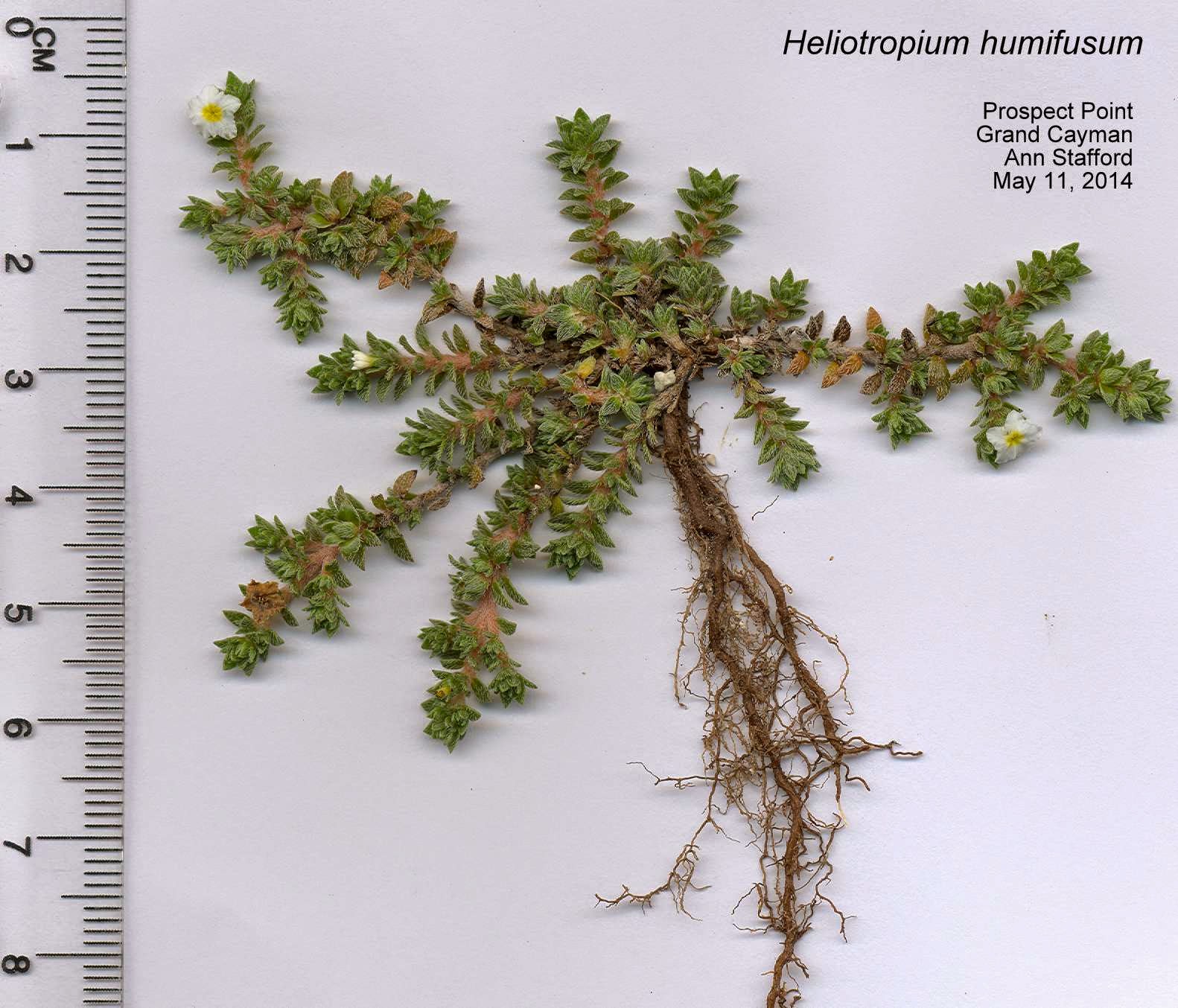 May 11, 2014 Watler Cemetery, Prospect Point, Grand Cayman
About ten years ago, Brenda Quin saw lots Heliotropium humifusum plants growing in a dry area in the vicinity of the Blow Holes, on the landward side of the main road (south coast). She described it as a ground cover with minute, white, star-shaped flowers. She tried growing one in a pot, but it didn’t take. A palm tree grew in the same pot.

A year ago she transplanted the root-bound palm tree into a larger pot. In early May, 2014, the little ground cover emerged from a seed or root that had been dormant in the soil for about ten years. 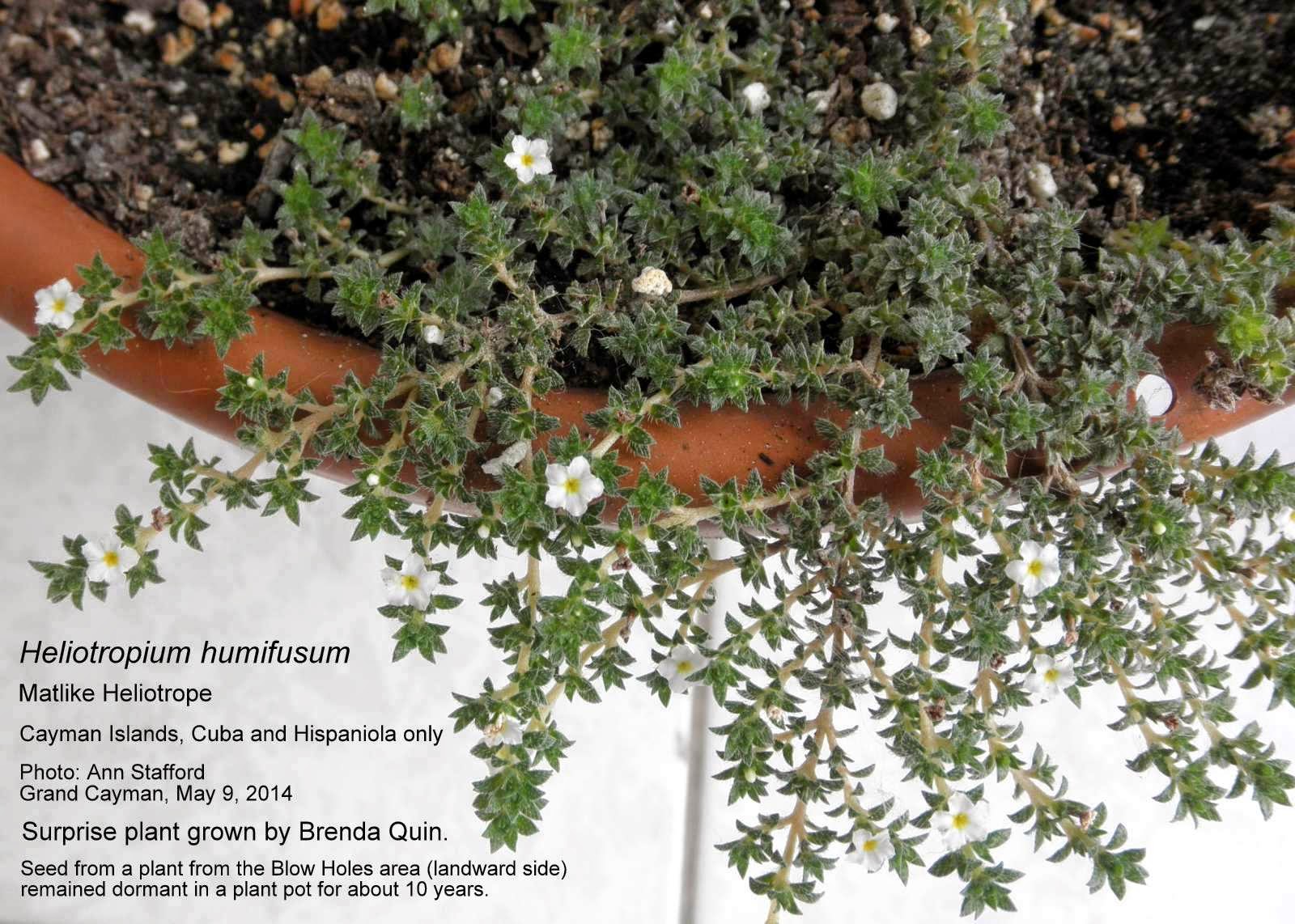 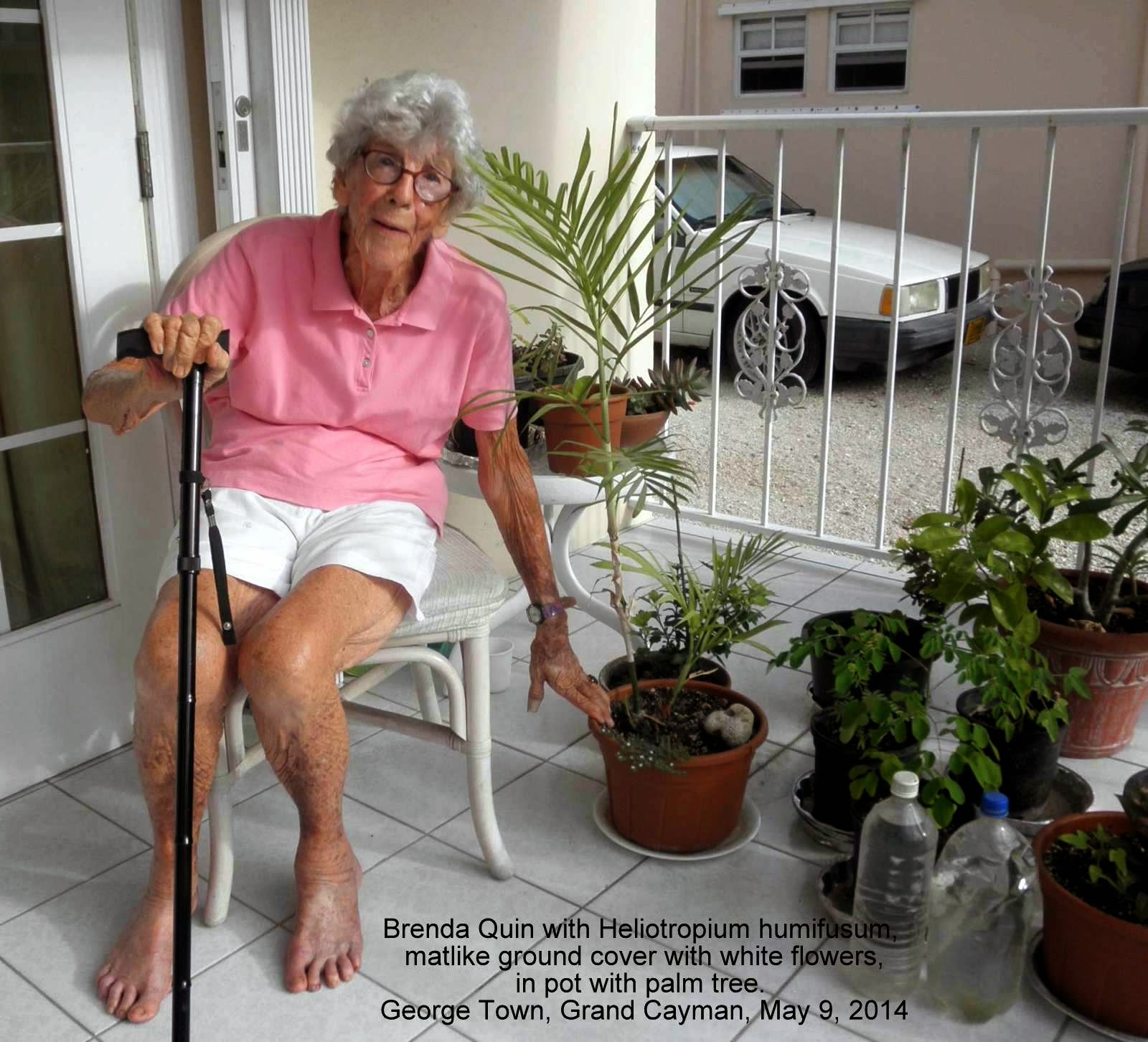 Brenda Quin, 86 years old, with her little Matlike Heliotrope that had been dormant for about 10 years,
in pot with palm tree. George Town, Grand Cayman, May 9, 2014 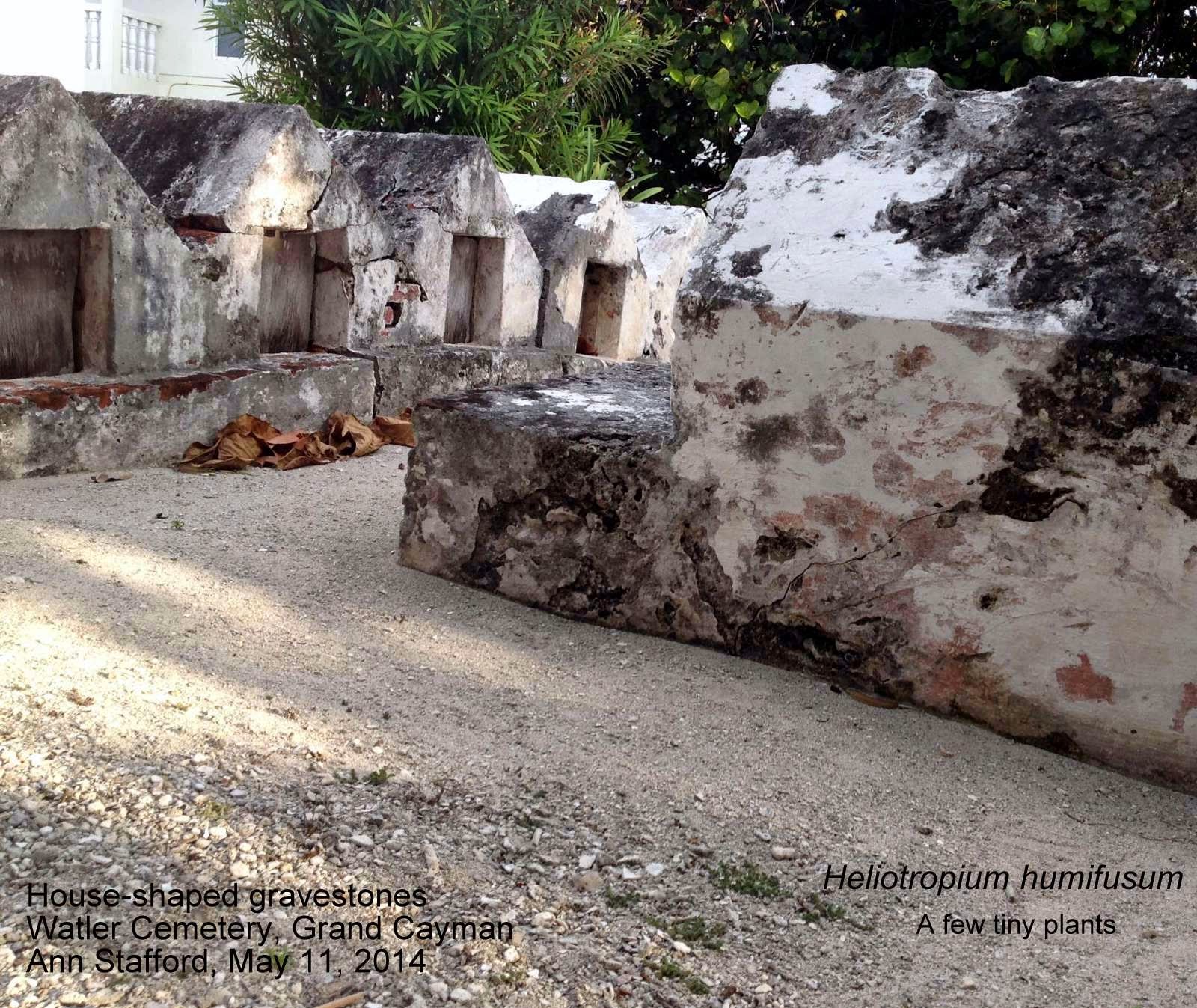 A few tiny plants flowering by the house-shaped grave-markers at the Watler Cemetery, May 11, 2014.
CaymanCultural images 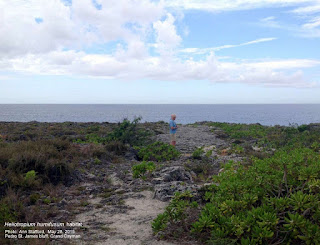 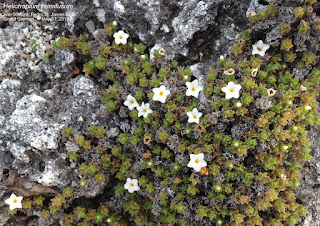 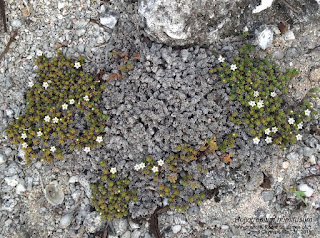 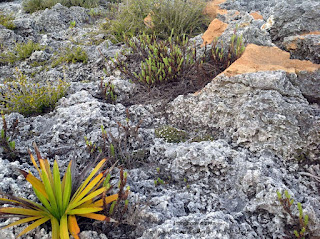 Islands from the Sea, Geologic Stories of Cayman
by Murray A. Roed, 2006 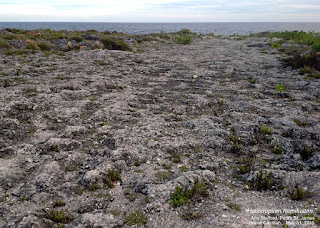 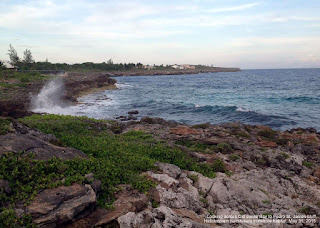 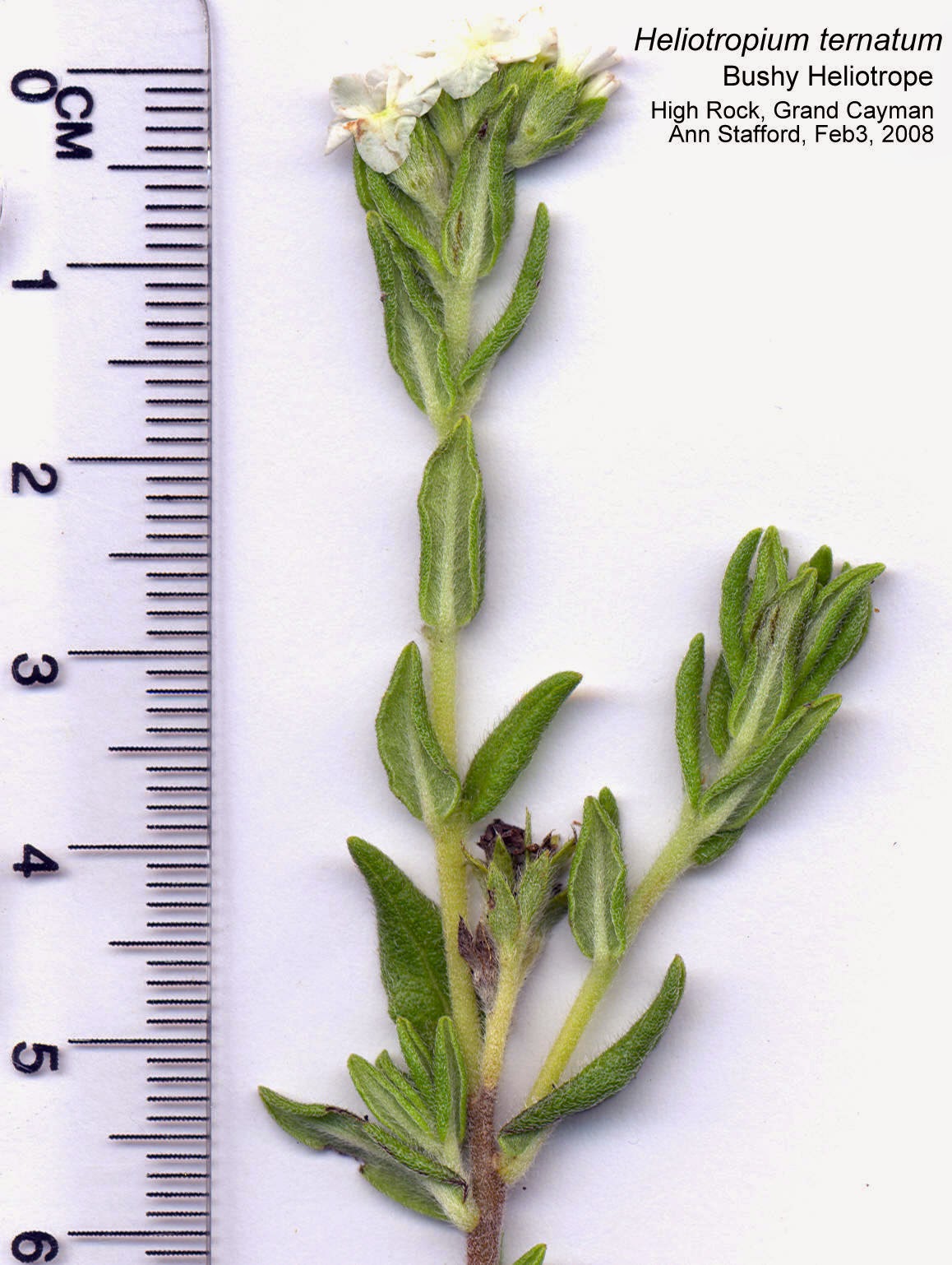 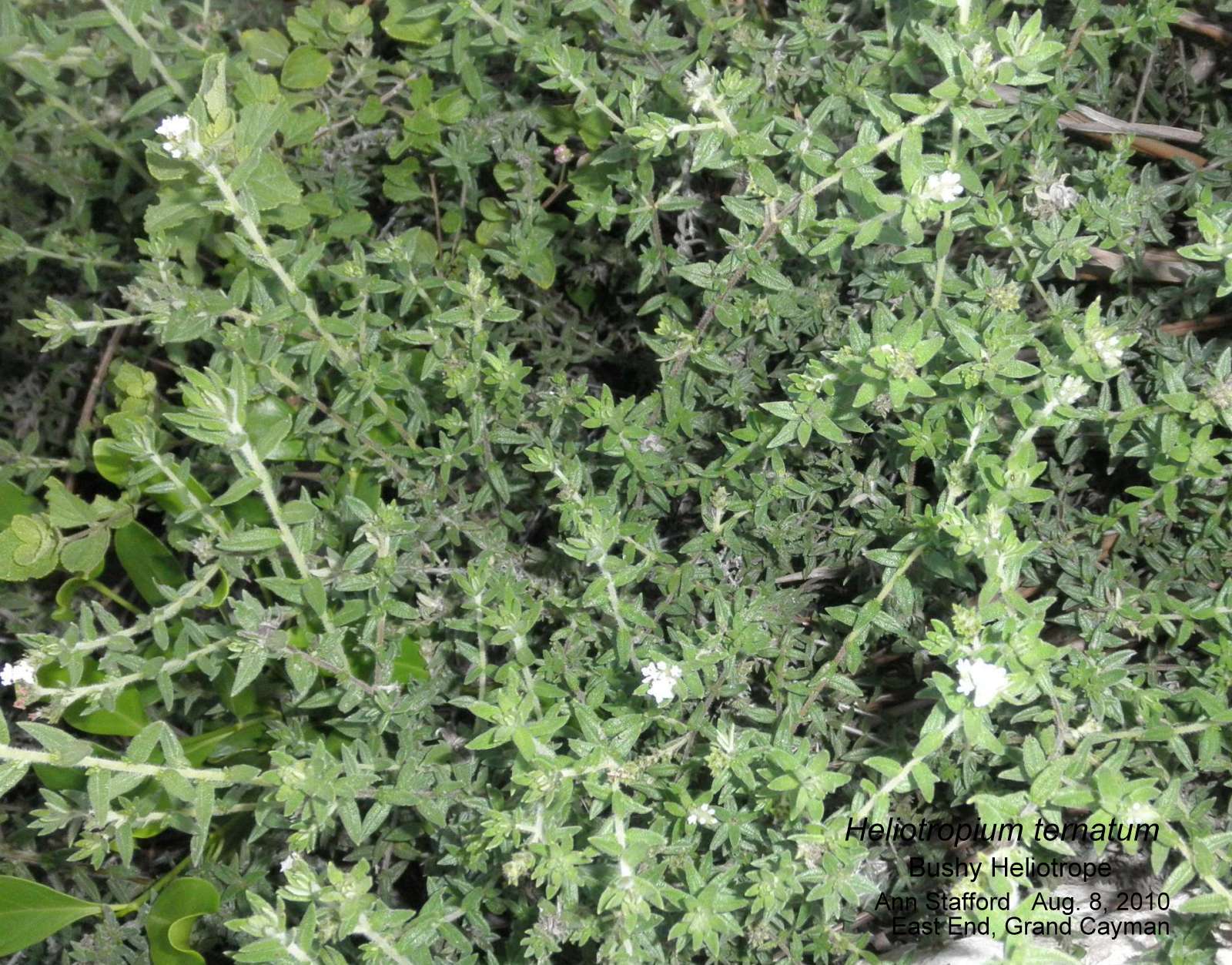