Tea Banker, a small mat-like herb with a woody taproot, leaves with a distinctive, lovely lemony smell and little yellow flowers, has traditionally been used in Cayman to make a refreshing tea. 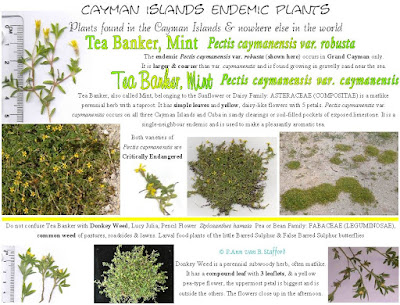 History
It was first recorded in the botanical literature of Grand Cayman in 1899 by Charles F. Millspaugh M.D. Department of Botany Curator, Field Columbian Museum, Chicago, Illinois. Millspaugh was a guest of Allison V. Armour, the Chicago meat-packing millionaire, on a West Indian cruise of the yacht ‘Utowana’; they visited the Cayman Islands during February, 1899. The chief set of Millspaugh’s specimens is in the herbarium of the Field Museum of Natural History in Chicago. Millspaugh published lists of his collection.
On February 8, 1899, the ‘Utowana’ stopped at The Creek ,‘Cayman Brae’ (Cayman Brac)  A Norther sprang up in the night, so they had to leave for  a point further west, where they anchored. They did some more collecting and then sailed on to Little Cayman, but found no safe harbour. They reached Georgetown (sic), Grand Cayman after dark on Feb. 9. The Health Officer forbade them to land as their last port (Port Antonio, Jamaica) was reported to be infected with measles.  They were, however, given permission to go ashore elsewhere as long as they kept away from any other person or dwelling. Because of the Norther, they anchored at ‘Spot Bay’ (Spotts).
Tea Banker was originally called Pectis cubensis, it had been found in Cuba. Millspaugh found it on Grand Cayman on Feb.14, 1899: ‘Fine full masses of this species were found in the sand of the roadside at Spot Bay, Grand Cayman (1279), but not seen elsewhere on the island. It is called "Flat-weed," and is used in infusion as a stomachic tonic.’ (Millspaugh, 1889)


Culturally Significant
In a two page article entitled ‘Bush Medicine’, published in the February 1973 issue of the Nor’wester magazine,  Ena Watler wrote: “It has fine green leaves, grows real close to the ground, and has tiny yellow flowers. Stick a bunch of it in boiling water and add some sugar and you’ll have a nice cup of tea to improve your appetite”.  (Watler, 1973)
Tea Banker - Pectis caymanensis, there were a lot of plants
in the sandy beach ridge yard of Capt. Carl Bush, #972 South Church St, Grand Cayman.
The house has been moved and in recent years no Tea Banker has been seen here.
Photo: Ann Stafford, Oct.30, 2002.
Critically Endangered
Tea Banker occurs in two varieties P. caymanensis var. caymanensis, Cuba, Grand Cayman, Little Cayman and Cayman Brac, near endemic, and P. caymanensis var. robusta, Grand Cayman endemic. Both are Critically Endangered. (Burton, 2008) 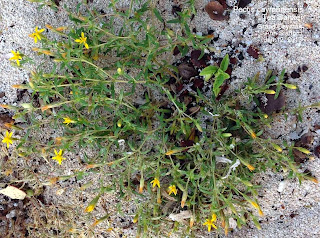 Observations
Grand Cayman cemeteries and beach ridges
In recent years it has been found growing in some beach-ridge cemeteries. Do the plants die naturally in a prolonged dry season and sprout during the rainy season? Might it be an annual? This is a challenge to monitor, because it grows amongst Zoysia grass, Donkey Weed Stylosanthes hamata and other ground covers. It may have been pulled up and used for making tea. Cemeteries are weeded and raked.  Specimens of the plants I have found from four different locations on Grand Cayman all key out to P. c. var. robusta, the Grand Cayman endemic. 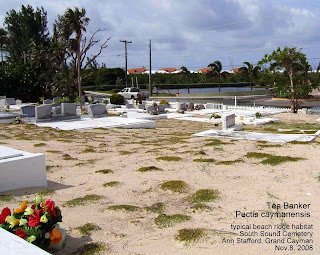 Tea Banker - typical beach ridge habitat
Photo: Ann Stafford, South Sound, Grand Cayman, Nov.8, 2008
Sister Islands
Has anybody found Tea Banker on the Brac or Little Cayman in recent years?  var. caymanesis occurs in sandy clearings or soil-filled pockets of exposed limestone.
Conservation (P.c. var. robusta)
It is difficult to transplant. Although it can be grown from seed, it seems to require salt, such as at a beach ridge habitat, and fresh water, (when rain falls after the dry season), for the seeds to germinate. 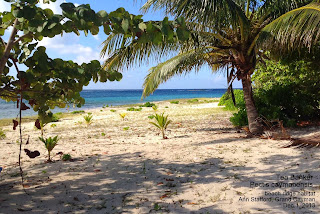 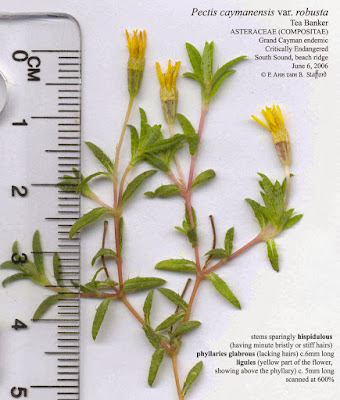 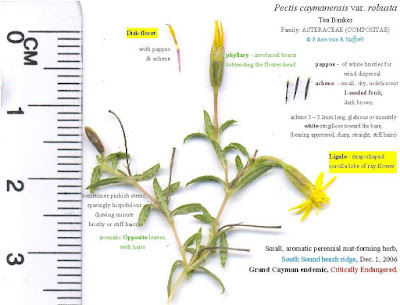 Suggestion for CONSERVATION of this delightful, culturally significant little wild flower that grows on sandy beach ridges: gather some seeds and sow them in Miss Lassie’s sand yard and beach. Next year, when the rains come, some may sprout! Tea Banker grew well in Capt. Carl Bush’s sand yard 400 yards further east, next to Sand Cay Apartments. 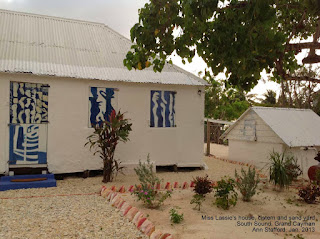 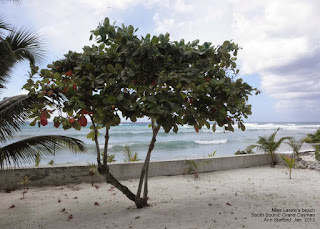